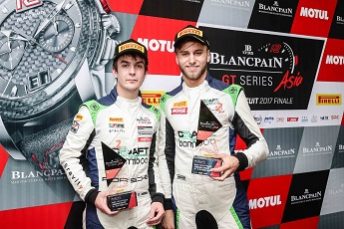 Craft-Bamboo Racing scored an incredible second place podium in the final race of the Blancpain GT Series Asia season with the #88 Porsche of Andre Heimgartner and Devon Modell putting in a great performance to end the season on a high. In race one, Modell and Heimgartner fought hard and broke into the top ten, crossing the line in P9 to take their first points of the weekend. Frank Yu and Jean-Marc Merlin also put in a stunning weekend and clenched the GT4 class drivers’ and teams’ championship in their #77 Porsche Cayman GT4 Clubsport MR. The #77 pair took victory in race one and followed that up in race two with a second place podium to finish the season with a lead of 30 points. The #99 VLT Porsche of Darryl O’Young and Peter Li Zhi Cong had a tough weekend, finishing P12 for race one before being ruled out from starting race two with a damaged front-end after an off track excursion on the warm up lap.

Devon Modell kicked off a damp race one from P6 under the safety car and maintained his position on the first lap. The safety car was almost immediately recalled due to an accident and the race was restarted with 45 minutes remaining. With the field bunched up on the tight 3.2km circuit, it was difficult for Modell to make progress and by the opening of the pit window, he found himself handing the car over to his teammate in P7. Heimgartner re-joined the fight in P6 and confidently held that position until the final few minutes of the race. With the rain falling at an increasing rate and after a big battle with a trio of Audis, Heimgartner slipped back to P9 as he crossed the line for the final time on Saturday.

Peter Li Zhi Cong was in charge of the #99 VLT Porsche’s first stint of the weekend and he did well to master the conditions, the two safety cars and a small spin early on to hand over to Darryl O’Young in P10. O’Young got back out in P12 after serving an extra 10 second success penalty for their race two win in Shanghai. He then got stuck in to try and make up lost time and positions. Unfortunately, the #99 VLT Porsche did not have the pace to challenge the leaders and with O’Young’s best efforts finished the race in P12.

Frank Yu began race one from P1 in the GT4 class and put in a great drive in trying conditions to hand the #77 Porsche over to Jean-Marc Merlin in P1. After a flawless pit-stop, Merlin was back out and initially running in P2 but very quickly found his way into the lead. Over the course of his stint, Merlin would retain the lead and bring the #77 Porsche home in P1 to take their fifth victory of the season, setting themselves up perfectly for their championship title claim on Sunday.

Andre Heimgartner took control of the #88 for the start of race two under the safety car and the torrential conditions made for a very difficult stint. After initially slipping back to P13, Heimgartner began to find the pace in the #88 Porsche and he became unstoppable, taking an incredible eight places to enter the pits in P5. Thanks to his teammate’s efforts, Modell was able to exit the pits and quickly slot into P3, putting them in the perfect position for the charge to the flag. Modell was able to expertly steer the #88 Porsche through the wet, catching the #18 Audi and taking P2 with 10 minutes to go. The British driver’s pace in the wet was astonishing and he continued to gain on the lead car, but with less than ten minutes to go, Modell couldn’t quite catch P1 and finished 2.562s behind to take the #88 Porsche’s third podium of the season.

On the #99 VLT Porsche’s warm up lap; Darryl O’Young hit a large body of standing water and hydroplaned onto the grass, which tore off the front splitter. When he returned to the pits, the crew were unable to be repair the damage and the #99 VLT Porsche was unable to take part in race two.

Jean-Marc Merlin started on pole position in the GT4 class with one goal, to finish the race and secure the championship title. With this in mind, Merlin was all about driving the safest stint, and he did a fine job to avoid trouble or contact and give the #77 Porsche Cayman to Yu in P4. Yu was able to get back out in P4, and with a small gap to close to a podium position, he soon slotted into third and kept his focus on finishing the race. Frank managed his pace and the heavy rain to maintain P3 until the final minute when a GT4 competitor spun off the track. This allowed Frank to move up a place before crossing the line in P2 to help secure the GT4 drivers’ and teams’ championship titles by 30 points.

“We are delighted to have scored a second place GT3 podium in race two with the #88 Porsche. It has been a long and hard championship year, but the points and podiums are a testament to the team’s hard work. I am very happy to see Frank and Jean-Marc take the GT4 drivers’ and teams’ championship for Craft-Bamboo Racing. We are now looking forward to a very busy period leading up to the famous Macau Grand Prix.”

“I started P6 and ran there for most of my stint, losing a place to the championship leading Audi and passing one of the Mercedes towards the end of the stint. The car felt good and we started making progress but the two safety car periods limited how much we were able to make up. The pit stop went to plan and Andre brought the car home in P9, after running P6 until the last couple of laps when the rain came down harder and the car struggled a bit.”

“Race two was one of our more eventful races this year. Andre started in P11 behind the safety car and battled back to P6 by the pit stop window after being caught up in someone else’s accident and dropping to the back of the pack. Again our stop went perfectly and we came out of the pits in P5. The car was amazing and I continued where Andre had left off, lapping very quickly and progressing up to P2, frustratingly getting within two seconds of the leader by the end. Just like Fuji, it was a case of what could have been as events in the race prevented us from getting that elusive first win in Blancpain GT Series Asia.”

I have to say thank you to the team for the car they have given me this year and all the work behind the scenes. I don’t think anyone expected us to end the year with three podiums to our name to go with the win for the 99 VLT Porsche.”

“Overall, it was a good weekend as we were able to get a podium, trophy and some good points for Devon. The tricky conditions made it really challenging but I really enjoyed it. We didn’t start off the weekend too well and battled the setup in race one. We pulled it all together on Sunday and overall managed a really awesome weekend.”

“It has been a tough weekend in Zhejiang. The car started off well in practice but we didn’t have the pace in qualifying. We were still dialing in the setup and unfortunately we couldn’t nail that. We had a very tough race one, we couldn’t get the tyres to work and we were struggling for traction. We didn’t have the pace to fight, Peter had a small spin early on and with our 10 second penalty from the previous race win, it was tough to get into the points.”

“Race two on the warm up lap, the car hydroplaned and went wide, went through the grass and it ripped the front splitter off, which ended our race right there. It was a major disappointment because the guys did an amazing job over night and I felt the car was really handling well. I want to say sorry to the team for not being able to run in race two. Overall, it has been a really good season and I want to thank Craft-Bamboo Racing for helping us to continue to make good progress.”

“We had a tough weekend in Zhejiang. It was my first time here and we struggled to find a good balance on wet tyres during qualifying and the first race. Unfortunately, the car was damaged on the formation lap of race two, so that was bad luck. We must keep positive and we have learnt a lot from these conditions. The team will continue to make improvements and we will focus on the new season.”

“Race one was wet but not much spray. Frank had a perfect start from pole and handed the car back to me in P1. I was the able to manage the lead from P2 to get this crucial victory for the championship.”

“Race two was very tricky conditions. GT3s were quite cautious all race long. As our only objective was to finish I took no risk and let my rival pass me from pole position. I much prefer racing with the objective to win and not only to avoid a stupid mistake. The stint therefore felt long and I took the car back home for Frank to finish the job and seal the GT4 drivers’ and teams’ championship.”

“We had a perfect weekend, we were quickest in both practices and we both qualified on pole. However, the conditions changed dramatically for race one on Saturday. We had to get a good result to be more relaxed on Sunday. My mission was to build a good gap for Jean-Marc in race one and we did just that.”

“Sunday we were more relaxed as we knew that we just had to finish the race without any incidents. Jean-Marc started on pole and avoided all the battles and handed the car to me in fourth. When I got out, I saw the P3 car right in front of me, so I pushed a little bit and took third and then finished the race in second. It was a really good weekend for us and it was a hard fought championship so we are very pleased to have taken both GT4 titles.”