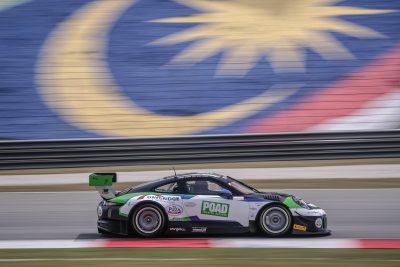 Craft-Bamboo Racing are looking for a strong start to their Blancpain GT Series Asia GT3 and GT4 campaigns during the opening round in Sepang this weekend. Running two Porsche 911 GT3 Rs and one Porsche Cayman GT4 Clubsport MR, the team is determined to build on their inaugural Blancpain GT success from 2017 and kick the season off with a podium challenge in both classes. Sandy Stuvik and Shae Davies will oversee the #911 Porsche 911 GT3 R, while Darryl O’Young and Aidan Read will command the #991 Porsche 911 GT3 R. Frank Yu and Jean-Marc Merlin return to the #77 Porsche Cayman GT4 Clubsport MR and are intent on retaining the GT4 drivers’ championship title in 2018.

Shae Davies and Sandy Stuvik present a strong combination in the #911 Porsche, with each driver bringing a select set of skills to this weekend’s two-race challenge. Australian driver, Davies, has a successful history in Porsche machinery, which he will be putting to good use as he transitions to the 911 GT3 R this weekend. While it is his first time in Sepang, the official pre-season test sessions before race one gets underway on Saturday should help him find his feet. Stuvik will be there to guide him thanks to his experience at the Sepang circuit during last year’s Blancpain GT Series Asia inaugural round. While Stuvik will have to adjust to the #911 Porsche, a very positive test session on Wednesday saw them finish firmly inside the top ten, which bodes well for coming improvements to be made before qualifying on Saturday.

Darryl O’Young will be looking to build on the success that he found last year in the Porsche 911 GT3 R and with the updates that have been made to the car for 2018, O’Young will be a formidable opponent to contend with on race day. Competing in the Porsche for the third consecutive season, O’Young is unmatched in his experience and will be using this to his advantage to gain an edge over his rivals. His knowledge of the #991 Porsche will be invaluable to teammate Aidan Read as he fully gets to grips with the car, and thanks to some pre-season testing in Sepang, Read is well on his way to turning laps at race pace. While Read is only 19, he already has a full season of the Blancpain GT Series Asia to his name and it is this experience that has helped him to settle so quickly into the team and the #991 Porsche.

Frank Yu and Jean-Marc Merlin are back behind the wheel of the #77 Porsche Cayman GT4 Clubsport MR and are eager to launch their title defence in Sepang. They face stiff competition this year from new manufacturer entries but have a dominant season of racing under their belts, which should prove invaluable against a fresh round of opponents. They debuted in Sepang last year with a win, followed by a second placed podium in race two. Vastly more experienced and even hungrier for victory in 2018, the pair are determined to go one better and take a clean sweep of the event this time around.

With Wednesday’s official pre-season test completed, Craft-Bamboo is already in a strong position with their GT3 entries and will be working hard to further develop their performance before qualifying on Saturday. Confident that they will be able to increase the pace over the coming couple of days as the drivers continue to settle into the cars, the team is firmly focused on kicking off their GT3 and GT4 title fight this weekend in succesful fashion in Sepang.

“We are heading into the opening round with a lot of confidence after a strong end to the 2017 season, some positive developments over the winter and a good test day on Wednesday. The championship is more competitive than ever, so while it will be tough, I am sure with the drivers we have onboard we can fight for the top spots in both races.”

“I think it was a good first day to try the Porsche; obviously it was a lot to adjust myself to, but we have been able to work with the team and I feel very comfortable. I am very excited to see how much we can improve over the weekend.”

“After day one of testing, everything is falling into place nicely. The car has rolled out fast and sharp, so that is encouraging. I am looking forward to a really strong weekend and I think there are some things that we can still tune up and sort out on the car, so I think it is going to be a very inspiring weekend and we will be in for a good showing.”

“The team did a lot of work over the winter, so it is good to get behind the wheel and verify all the improvements and the updates on the car. It has taken a big positive step since Sepang last year and I feel we are progressing well. Wednesday’stest day was great because it gave Aidan and I the chance to work together and get prepared for the race weekend. Everything is feeling good and I am looking forward to the two races here in Sepang.”

“It has been a good day of testing, it all went smoothly, and we made a few setup changes trying to improve the performance of the car for the weekend. I got to a very comfortable point with the car during testing, so I am very happy with that. The weekend has started quickly and there is lots of competition, but it should be a good weekend. If we can make some more improvements, we will be right on the pace.”

“I am very excited to be back in the championship and to be back in the Cayman with my old teammate, Jean-Marc. This year there are a few more manufacturers coming into GT4, so the competition is not going to be as easy as last year. We are in pretty good form and hopefully we will be able to defend our title, but it is going to be tough. I really enjoy the format and SRO have done a really good job of building the championship. I am also really looking forward to the 2018 updates for the Cayman that focus on making the car lighter. I can’t wait to get in the car and try them out.”

“It will be fantastic to return to the Blancpain GT Series Asia to continue the fight for the GT4 drivers’ championship with my teammate, Frank. We worked incredibly well together last season and now that I have had the chance to learn the Asian circuits, I am confident that we have a shot at defending our title. New entries this year will make it a challenge, but that is what makes the GT4 class so exciting.”