Craft-Bamboo Racing in search of victory at Suzuka

Craft-Bamboo Racing in search of victory at Suzuka 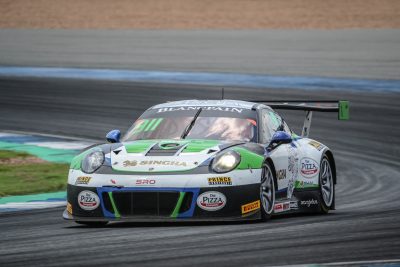 Craft-Bamboo Racing are in search of victory this weekend at the Suzuka International Circuit in Japan, as they hope to go one better than their second-place podium finish in 2017. After a tough start to the season, the team has worked hard on developing their two Porsche 911 GT3 Rs and they have high hopes that Suzuka will give them the opportunity to challenge for victory against the series’ current leaders. Frank Yu and Jean-Marc Merlin are focused on closing the 30-point gap to the top of the GT4 championship and after taking victory in race one last year, they are strong contenders this weekend on the famous 5.8km circuit.

Sandy Stuvik is no stranger to Suzuka after taking second place in race two last year. With two rounds of competition in the #911 Porsche 911 GT3 R under his belt and an intimate knowledge of the Japanese Formula 1 circuit, Stuvik is confident that he will be able to maximize Craft-Bamboo’s package this weekend. Shae Davies is new to the 18-turn circuit but after showing strong pace in the Porsche in the first two rounds, his sights are set on his first Blancpain GT Series Asia win. With rain looming, the Porsche may find itself in its element once again and after proving its effectiveness last year the #911 pair are a big threat to the competition. Stuvik and Davies will be pushing for their best results of the season in Japan and with points on the board already, a victory would see them back in the fight in the championship standings.

Darryl O’Young and Aidan Read are also looking to bounce back after a challenging weekend in Thailand last month. O’Young found great success in Suzuka last year, taking pole position for race one and it is a result he will be fighting for again on Saturday to give the #991 Porsche the boost it needs. It is a circuit O’Young knows well with the Porsche 911 GT3 R, which will help him in the fight against the biggest Blancpain GT Series Asia grid so far, with 23 GT3 competitors on the entry list. Read performed admirably in Suzuka last year, finishing fifth in the ever-worsening wet conditions and he is determined to take the next step with Craft-Bamboo this weekend. With the proven performance of the Porsche 911 GT3 R at Suzuka, O’Young and Read aim to kick start their season with a huge haul of points to put them back in the fight in the latter half of 2018.

In the incredibly competitive GT4 category, Jean-Marc Merlin has made the switch to the Mercedes-AMG GT4 along with his co-driver, Frank Yu. The pair are currently fourth in the championship, 30 points behind first but only 16 points behind second place in the driver standings. After their brilliant win in race one last year, the pair are eager to put their new car through its paces and catch the lead Mercedes-AMG to defend their GT4 championship title. With no success penalty to contend with, unlike their three main rivals, the current champions are in the perfect position to climb the ladder at this crucial mid-point of the season.

“The team returns to Suzuka with high hopes following a good showing last year. After a frustrating start to the season we are hoping for more favourable conditions to show just how strong the team and driver line-ups are. I am confident our relentless efforts will finally get rewarded this weekend”

“After a podium finish in the rain here last year, I’m looking forward to returning to this legendary circuit. I’m confident the package Craft-Bamboo Racing have this year will put us in contention for the race wins, and we’re hoping the forecast will remain wet! I’m looking forward to continuing the development of the #911 car together with my teammate Shae Davies and Engineer Matt Harvey, and the whole CBR crew. Being able to drive with the passionate Japanese fans watching is always a pleasure, and I hope we can put on a good show!”

“I am extremely excited to head to Suzuka. It will be my first time at the circuit but one that has been a goal of mine for many years. I have high hopes for our package this round from what we saw from Craft-Bamboo in 2017. I believe our team and all the guys and girls on cars #911 and #991 have been doing a mega job and I look forward to capitalizing on that with my teammate Sandy this weekend! The weather forecast looks favourable for us also, so it should be a great weekend!”

“I am really looking forward to going back to Suzuka. Last year it was a big turning point for us in the season as I was able to get pole position, which was a big boost for the team. The team also got our first podium with second place overall, so I think we have high hopes coming into this race to take a big step forward. No one is happy with our results for the first couple of rounds so far, so we go into this race quite optimistic and we will work hard to achieve our season’s first win.”

“Suzuka is a circuit with a lot of character. I loved the challenge last year and it’s the highlight of the calendar for me. The Porsche was a car to watch last year in Japan. It really propelled itself up the grid and I’m excited to find out how far Darryl and I can take it this weekend. We’re expecting a competitive weekend based on past performance at the track.”

“I am really happy to go back to Suzuka, it is one of my favourite circuits around the world. We had a good result there last year and this year we are going to be testing a new car. We will see how it goes but we will try fighting for the championship for the rest of the year.”

“I look forward to experiencing the Japanese hospitality and the historic Suzuka racetrack again this weekend. Frank Yu and I will take on the rest of the championship with a new car and great motivation.”