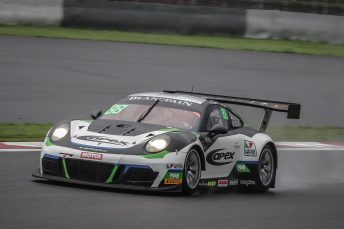 Craft-Bamboo Racing are focused on ending their inaugural Blancpain GT Series Asia season with a top finish at the Zhejiang International Circuit. With the recent success of both the #88 and #99 Porsche 911 GT3 Rs, the team is keen to end the 2017 season on the podium. The #99 VLT Porsche is coming off a huge win in Shanghai and with Peter Li Zhi Cong reuniting with Darryl O’Young for the final round, they are in an excellent position to be fighting for victory. After some bad luck in Shanghai, the #88 Porsche is looking to bounce back and return to the podium scoring form that has been seen over the past few rounds. New Zealander Andre Heimgartner joins Devon Modell in the #88 Porsche 911 GT3 R and together with their combined Porsche experience, they should prove to be a very effective combination. Frank Yu and Jean-Marc Merlin have only one focus this weekend and that is to win the GT4 drivers’ championship title. With a 12 point lead and a successful season behind them, they will be the ones to beat in Zhejiang.

Andre Heimgartner brings with him extensive experience in the Porsche Carrera Cup and is eager to make the step up to the 911 GT3 R and help Devon Modell continue the #88 Porsche’s record of success on the podium. With some unfortunate bad luck in Shanghai preventing the #88 from delivering, Modell is intent on helping put the #88 Porsche back on top in Zhejiang. The circuit is new to both drivers but with Craft-Bamboo Racing having contested the circuit earlier in the year with their LMP3 and TCR cars, the team should be able to help them adapt quickly and get them to the front of the grid in qualifying.

After securing Porsche’s and Craft-Bamboo Racing’s first win in the Blancpain GT Series Asia in Shanghai, the #99 VLT Porsche is eager to return to its winning ways in Zhejiang. Darryl O’Young is fired up to tackle the new 3.2km circuit and he welcomes the return of his teammate Peter Li Zhi Cong, who returns from an ankle injury. With Li back up to full strength, the #99 pair is well prepared to take the fight to the competition and with O’Young now sixth in the drivers’ championship, a strong weekend of podium results could see him break into the top three for the perfect finish to his season.

With yet another win under their belts in Shanghai, the #77 Porsche pairing of Jean-Marc Merlin and Frank Yu now have a 12 point lead over their season rivals in the #10 Porsche. Both Yu and Merlin have been formidable competitors this season, taking four wins and three podiums in eight races. With their eyes on the championship title, the #77 duo will be doing everything possible to ensure they notch up further wins this weekend. Along with the rest of the grid, the Zhejiang circuit will be a new challenge, but for the GT4 contestants, the short, tight and twisty layout will provide plenty of GT3 traffic to manage and avoid. If the pair can master this, then they have a very good chance at walking away with the inaugural GT4 drivers’ championship on Sunday.

“Zhejiang has been a happy hunting ground for Craft-Bamboo Racing, having scored a podium last weekend in the TCR International Series, while also taking a win earlier in the year on our way to winning the FRD LMP3 Series championship. I am hopeful that this circuit will be good for us again, and the layout of the circuit should suit the Porsche. With the form we have showed lately with a number of podiums and wins, we hope to finish the season in fine form with some good results in the #88 and #99 car. I also hope to see Frank Yu and Jean-Marc Merlin take the GT4 drivers’ championship title to top off the weekend.”

“I’m looking forward to the season finale in Zhejiang where hopefully we can put the bad luck from Shanghai behind us and finish the year with a high. I have a new co-driver in Andre this weekend and we should work well together. The track is new for most of the grid, which should help us and hopefully it will suit our car.”

“I am really looking forward to the challenge of racing in a new car and on the new Zhejiang International Circuit in China. I hope to do a really solid job this weekend and make sure that we get some good results to end the #88 Porsche’s season on a high note.”

“Craft-Bamboo Racing has gained a lot of momentum lately with our first win as well as 3 consecutive weekends with a podium. We have gained a lot of points in the drivers’ and teams’ championship over the last few rounds, and are aiming for a strong weekend here in Zhejiang to close out the season. It seems this circuit could suit our Porsche’s, but with it being a new circuit, it will be difficult to say until we hit the track. I am looking forward to the race weekend!”

“I am happy that I am able to drive in Zhejiang after recovering from my ankle injury. This is the last meeting of the championship and we are aiming for a strong points haul in Zhejiang. After the great job in Shanghai in round five, I believe our car will improve even further in Zhejiang.”

“We are heading into the final round with a 12 point lead in the championship and we are going to try and do our best. It is a new circuit for everybody and we will run a clean race to finish off the season with the championship title.”

“I am really looking forward to discovering a new track this weekend. I feel that traffic management will be crucial in the narrow half of the circuit and Frank and I will need to be on our toes if we are to take the GT4 drivers’ championship title this weekend.”