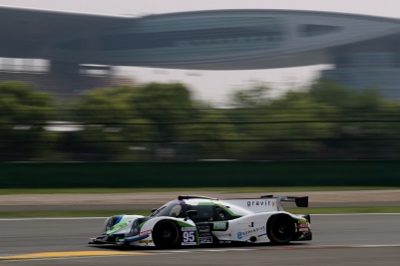 Craft-Bamboo Racing found several positives despite a tough opening round of the China Endurance Series, which saw bad luck prevent them from taking a podium or possible victory in Sunday’s main race. A challenging opening race due to a lack of pace resulted in the #95 Ligier JS P3 of James Winslow and Neale Muston scoring P6, ahead of the #96 sister car of Nathan Kumar and Rick Yoon who finished in P9. The team worked hard overnight and considerable progress was made following an aggressive setup change. It allowed James Winslow to shoot from P9 to P3 in the #95 before a tyre puncture ruined any chances of success, forcing them to finish in P6, with the #96 following in P8. It was unfortunate, but the team showed good development of the car over the weekend as well as giving their new prototype drivers some invaluable seat time in the Ligier JS P3. Craft-Bamboo Racing are already looking ahead to Ningbo where they hope to make further leaps in performance and return to the China Endurance Series podium.

Neale Muston kicked off the #95’s season from P8 on the grid and made a strong start to put himself straight into the battle for position in the midfield. He held his own and managed to take two spots in the opening couple of laps, showing good pace in the process. While trying to press on, Muston had to defend his position and displayed great defensive skill but eventually conceded his place and continued his stint from P7 where he would remain until the compulsory driver change. After a flawless pitstop, James Winslow was able to re-join the race in P7 and he quickly set about reeling in the competition. The #95 driver was turning consistent laps and was soon able to make a move for P6 during the final ten minutes. Unfortunately, Winslow did not have the pace or the time to continue his charge up the field and the #95 Ligier crossed the line in P6, collecting some valuable first points of the season.

Rick Yoon oversaw the first stint in the #96 Ligier and he got underway from P6. He made a clean get away during the rolling start but was forced down the order during the opening tussle and slipped into P8. Yoon would further battle with the competition throughout the rest of his stint and he showed great promise during his first foray in a prototype car, eventually pitting from P9 to change to, Nathan Kumar. After the pitstop shuffle had settled, Kumar found himself fighting from P9 in his first ever stint in an LMP3 and while he briefly dropped to P10, he fought back into P9 in the final moments of the opening race to claim some points for their championship campaign.

It was James Winslow’s turn to start the race in the #95 Ligier and he was off to an absolute flyer, slicing his way through the field from P9 up to P4 in only the first lap. Finding much better pace than Saturday, Winslow was confident that he could continue his climb up the ladder. With only ten minutes of racing under his belt, Winslow had managed to put the Ligier into P3 and he continued his push to the compulsory pit stop. Unfortunately, Winslow picked up a very untimely tyre puncture during his in-lap, losing the #95 pair valuable time and ruining their chances of a possible victory or podium, as without the puncture, Muston would have surely come out of the pitstop sequence in the lead. Muston settled into P8 after the pitstop window had closed and began the final stint of the weekend. It would be hard to regain positions, but Muston never stopped fighting, making up a place and taking P7 as the race entered the final 15 minutes. The Australian continued the fight to the flag and was on the tail of P6 but didn’t have enough time to make a move before the chequered flag fell. It was an unfortunate end to a race that showed so much promise for #95 but the P7 finish, classified P6 after post-race penalties were handed out, allowed the pair to tally up some more championship points in preparation for round two in Ningbo.

Nathan Kumar began Sunday’s main race from P11 and he knew he had his work cut out for him but with the team’s efforts overnight to improve the setup, the #96 Ligier was in with a chance of making up some positions. Kumar got off to a good start and was soon able to snatch two spots from his opponents on the opening laps and move into P9. Over the coming laps he faced pressure from behind but held his own defensively for as long as possible but soon slipped back to P11. A small mistake resulted in a spin, which flat-spotted the tyres on the #96 and made it difficult to maintain full race pace. Kumar finished his stint and pitted from P11, allowing Yoon to re-join the race from the same position where he would begin his fight to reclaim some ground. Yoon slowly chipped away with each lap and was able to take P10 with 20 minutes remaining. Yoon’s consistent pace and clean driving style allowed him to move further up the order, taking another two places as his opponents made critical errors that allowed him through. As the hour-long race came to an end, Yoon brought home the #96 Ligier in P8 giving them another crucial points finish for their first weekend in the China Endurance Series, closing out a very impressive prototype debut.

“It was not the easiest weekend due to a new tyre compound as well as three drivers either new to the track or to prototype racing. I’m proud of the team spirt to overcome early setup issues to get the car back on pace in the main race on Sunday, which should bode well for round two in Ningbo. James had a strong stint moving from P9 to P3, but an unlucky puncture ruined all chances of a podium finish. Despite this, the team remains very motivated to make big progress at the next event.”

“This weekend we faced the challenges of a different tyre construction after our championship winning season last year and with limited practice this was no easy challenge. After a tough start we worked hard as a team to find a new setup and by race two were back at the front and running in P3. This would have been P1 at the driver change pitstop, but unfortunately, we had a puncture mid corner at the fast T7 on the in lap and our hard work didn’t get the reward it deserved. The whole team did an amazing job to pull together and find a great set up, Neale drove extremely well, and we look very strong for the rest of the season”

“What a fantastic event to experience! Great looking car and a top-notch Craft-Bamboo team made the driving part a pleasure. Met many new friends this week but also was challenged to push my abilities amongst a world-class field. Bring on the rest of the series!”

“This weekend was a learning curve for me, new car, new track. And ultimately trying to find the setup to get the car into its sweet spot. None the less, it was a great environment to be competing with such a professional team that allowed me the chance to experience my first steer of a prototype racing car.

Whilst our actual race result was not where we would have liked to end up, we take away many lessons and to bounce back stronger in the next round. Rick Yoon must be credited for his solid performance as my co-driver, he was able to extract good performance out of the car from the word go. As well as the entire crew of mechanics and engineers in our garage at Craft-Bamboo, that went above and beyond to make sure we had the best platform we could possibly have, even with limited knowledge of the workings of the new tyre. I’m confident we will be able to put on a good show at Ningbo circuit next month in round two with all that we have learnt over the course of this race weekend.”

“I am quite happy with my qualifying result, P6 and fastest amongst bronze drivers though we struggled to find the right setup for good race pace. The entire team have put in their best efforts and we have found a good base for the full season. In the end, it was a great opportunity for me to drive an LMP3 machine for the first time with such great people from Craft-Bamboo Racing.”