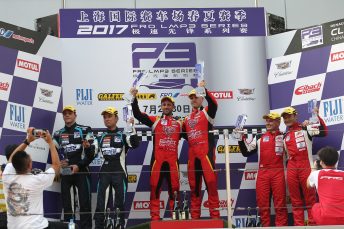 Craft-Bamboo Racing and Disney●Pixar dominated the second round of the FRD LMP3 Series in Shanghai with an incredible double pole position, victory in race one and second place podium in race two. The #95 ‘Lightning McQueen’ Ligier JS P3 driven by James Winslow and Mathias Beche was true to its name, besting the entire field to leave Shanghai with their drivers’ championship lead still intact. The pair will head into round three with a 12 point lead in the standings, putting them in an excellent position to stake their claim for the title at this crucial mid-point in the season. The #20 ‘Jackson Storm’ Ligier had two strong points finishes this weekend, fighting back in race one to go from P8 to P4. Greg Taylor and Marco Bonanomi made another comeback in race two, taking the #20 from P7 to P5 to end their weekend firmly in the points.

It was Winslow up first in Q1 and he did not disappoint, crossing the line on his final flying lap to snatch away pole position by almost one second. Beche hopped in the car for Q2 and finished the session with a substantial 1.9 second gap to score their second pole in Shanghai.

Taylor took control of the #20 ‘Jackson Storm’ in Q1 and did well to beat other Bronze drivers and secure a P8 start for race one. Bonanomi was on the pace in Q2 and found himself in a very intense battle, with six drivers separated by only 0.9s. The Italian finished the highly competitive session in P7 to set the #20 up for a strong challenge in race two.

Winslow would take the helm of ‘Lightning McQueen’ for the start of race one and he got off to a magnificent start, expertly leading the field into the first sweeping right-hander. From here, Winslow put his head down and began to pull away from the rest of the grid, gaining crucial tenths of a second with each passing lap before he handed over to Beche with a lead of six seconds. After a flawless pitstop, Beche was thrust back into the mix and found himself running in P2 after the pit stop window had closed and the field had settled down. With only 0.5s to P1, he just needed to pick his moment and make the move stick. After an incredible battle with the leader, Beche retook the lead with 10 minutes to go and instantly began to pull away. He continued his faultless drive to the flag to claim victory for the #95 ‘Lightning McQueen’ Ligier.

Greg Taylor got race one under way for ‘Jackson Storm’ and he made a flying start, jumping two places by the second lap and showing that the #20 had the pace to challenge the leaders. The Australian put in a faultless stint, staying with the pack and handing over to Bonanomi once the pit window opened, still in P6. Thanks to Taylor’s solid stint, Bonanomi was soon able to move into P4 after the field had calmed down after the 10 minute pit stop window. The Italian had closed the gap to six seconds and was continuing to make ground on the race to the flag. While he was making good ground and caught third place, Bononami couldn’t make a pass by the time he crossed the line, but brought the car home to a valuable points finish in P4.

It was Beche’s turn to lead race two and he did so with a flawless rolling start, not only maintaining P1 but pulling away from the first corner. It wasn’t easy for the #95 driver though, with the competition nipping at his heels and applying pressure. Beche kept his cool and proceeded to create a gap of 1.5 seconds over second place as he pulled into the pits to change to his teammate. Winslow re-joined the fight in P4 and it wasn’t long before he was climbing back up the order and into P3 with a text book overtaking manoeuvre. With just less than 10 minutes left, Winslow had a 14 second gap to close and he was pushing the #95 ‘Lightning McQueen’ Ligier to its limit to do so. His pace was unrivalled, with the #95 claiming the fastest lap of the race in the process. Winslow was closing in and managed to fight his way into second place during those final ten minutes. The #95 was in contention for the win but just didn’t have enough time to reel in the lead car, ultimately crossing the line in P2 for their second podium of the weekend and giving them the biggest points haul of the weekend.

The #20 ‘Jackson Storm’ put in another strong performance in race two, this time with Bonanomi in charge of the first stint. Once again the #20 was able to take away a position on the start, moving up into P6 to begin his race two challenge. Bonanomi focused on carving his way up the field and within 15 minutes he had managed to close in on P5 before making a clean pass up the inside and into P4 before the pit window opened. Taylor re-joined the fight in P4 and made a big push to the finish, maintaining his position until the final stages of the race. He became embroiled in a battle with the car behind and defended to the best of his ability, but wasn’t able to hold on until the chequered flag, crossing the line in P5 for another solid points finish to put them fifth overall in the standings.

“It has been a really strong weekend for the team; we had a lot of guests and promotion for ‘Cars 3’, so it was important for the team to get strong results. The team delivered as we finished up with a double pole, a win, and strong points by both cars. We found some areas to improve for the next race so the team will keep pushing to improve as this is only our second weekend with the car.”

“It is another win for the team and I am very happy; it was not an easy one and I had to fight through some other competitors with good pace. I had one chance, which I took for the lead. I then controlled the car and tried to stay out of trouble from the guy behind to bring the car back safely to get this victory. Well done to James and to the whole crew of Craft-Bamboo Racing for this flawless race.”

“Race one was excellent, it was the perfect race for us. All the engineers at Craft-Bamboo Racing did a very good job and it made my job easy. I made a good start and managed to pull away in the lead. I wanted to look after the rubber so Mathias had a good car at the end of the race, so I knew he would be battling with some very good drivers. Everything went 100 percent according to plan and this result helps us to extend our championship lead.”

“Race one was good, it was a pretty clean start, I had a bit of contact with one of the other cars on the outside but then I put my head down and stuck with the group in front. The car felt really good, especially with some of the changes we made. It gave the car really good balance and I look forward to tomorrow as we are starting a little further up the field.”

“I am quite happy with the result (P4) as we started P8. It is some good points for us but I am little disappointed as I got blocked at the pit exit by another car which was two laps down, so I was not in the fight even though I had the pace. I lost about 10 seconds for this and managed to catch up in the final stage but it was too late and everyone was struggling with tyre degradation. Thanks to the team, I am very happy for my first LMP3 race in Shanghai and everyone did a great job as the car is fast and reliable.”

“I am pretty happy with the weekend, scoring strong points and extending our lead in the championship. The first race was perfect, the second race we did the best we could with the package we had. Now we have to keep our head down and work on our setup in the high temperature conditions. I am confident and looking forward to the next round of competition here in Shanghai. My teammate did a fantastic job overtaking a few cars, the team is very professional and very competitive and it’s a pleasure to race with them.”

“It has been a good weekend overall, double pole position, victory and second in race two. These are very good results for the team, so a big thank you to Mathias and Craft-Bamboo Racing. Unfortunately, we had a slight brake problem and couldn’t maximize our package but we still managed second place and go into the next round feeling very confident.”

“Race two was good, Marco went out first and he did a great job to bring it back to me in P4. I found it very hot in the car, I came into the weekend with a head cold and it got the better of me. I struggled with the temperature and the grip level of the car wasn’t so great. I managed to bring it home in P5, which is good points for us but I am looking forward to coming back in three weeks’ time in better health. The team was fantastic this weekend and it is always fun with the guys here and driving for Craft-Bamboo.”

“Race two was hard as it was very hot today. We started P7 and I ended up P4 by the pit stop, so I had some good battles on track. It was tough to manage the tyres in the heat but I did my best to gain as many positions as possible. Greg did a good job to bring the car home in P5 and secure some good points. So overall, the team did a great job this weekend.”