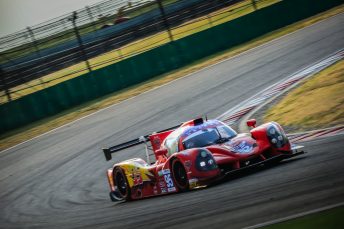 Craft-Bamboo Racing is determined to extend their drivers’ and teams’ championship lead during round three of the FRD LMP3 Series in Shanghai this weekend. With the #95 pairing of James Winslow and Mathias Beche leading the competition by 12 points, finding success in Shanghai will be vital to their title aspirations before they head into the final round of the season in Zhuhai next month. Alex Tagliani will return to the #20 ‘Jackson Storm’ Ligier JS P3 and will be joined by newcomer, Dean Koutsoumidis, who replaces Greg Taylor for round three, as he is unable to attend due to unavoidable business commitments.

Mathias Beche and James Winslow have continued their streak of success that they started in round one, with a further two pole positions and one victory in Shanghai last month. The pair currently sit at the top of the drivers’ table with 61 points, only 12 points ahead of second placed Andrew Waite and Yann Clairay. The #95 ‘Lightning McQueen’ needs another weekend of top results to ensure they leave Shanghai with a comfortable lead. Beche and Winslow have proven to be an incredibly effective combination, taking three out of four pole positions and two out of four victories. This weekend, both drivers will strive to add to their impressive record of success, and thanks to the data collected from Shanghai in round two, Craft-Bamboo will be further pushing the limits of the #95 ‘Lightning McQueen’ Ligier in search of victory.

Dean Koutsoumidis, who joins the team for round three, is an Australian GT Champion who took the championship title in 2012 and finished second overall in 2014. He is also an avid endurance racer, scoring second in both the 3 Hours of Sepang and Thailand. In 2016, Koutsoumidis joined the Asian Le Mans Series and piloted the Ligier JS P2 to second overall in the LMP2 drivers’ championship, making him the perfect fit for the #20 ‘Jackson Storm’ Ligier. The Australian driver will have to memorize the Shanghai circuit but should be able to quickly find the pace thanks to his extensive race time behind the wheel of a Ligier JS P3 in the Le Mans Sprint Cup and Road to Le Mans events. Alex Tagliani makes his return to the FRD LMP3 Series this weekend and is also tackling the Shanghai track for the first time in his career. After getting acquainted with the #20 ‘Jackson Storm’ Ligier in round one, Tagliani is ready to take his performance to the next level this weekend and will be using Craft-Bamboo’s experience from round two to his advantage when getting up to speed in the early sessions. The Canadian showed great pace during his first outing in the Ligier and together with Koutsoumidis, the #20 ‘Jackson Storm’ is a true podium contender for both races this weekend.

“While we are currently leading the championship, the FRD LMP3 Series is incredibly competitive, so we must be at the top of our game this weekend and take every point we can. Alex Tagliani is back in the #20 Ligier JS P3 for Shanghai, so I wish him the best of luck on his return to the series and I also want to extend a warm welcome to Dean Koutsoumidis, who I know will be very quick in the Ligier. I hope to see the #95 of Mathias Beche and James Winslow taking more pole positions and victories to head into the last round of the championship with a strong lead.”

“This round will be determinant in the fight for the championship. I will do everything I can to stretch our lead and keep us on the safe side for the last round in Zhuhai. Still, anything can happen and we need to make sure it is another perfect weekend if we want to win the title.”

“I always look forward to driving with Craft-Bamboo Racing, the team has great momentum and the energy and spirit within the team has never been better. We head into this pivotal weekend for the championship with a strong mindset and will approach the race weekend with the same winning mind frame to push hard for another win.”

“I am very excited to be driving this weekend in the FRD LMP3 Series Shanghai round. I am also particularly excited to be driving for the first time with Craft-Bamboo, which is a world-class race team that I have followed feverishly for quite some time. Craft-Bamboo has enjoyed much success in varied categories across the world and to be in their garage in one of their cars with their highly talented crew is an honour. The FRD LMP3 Series is also very exciting. I have driven the Ligier JS P3 in the Le Mans Sprint Cup and Road to Le Mans race and can’t wait to get back into the car. I have never been to Shanghai, so my first priority is to learn the track, and then take it from there.”

“I am really looking forward to round three. I missed round two and I was watching the team from a distance. Shanghai looks like an amazing track and I am definitely looking forward to racing there. I think it should be a strong weekend for the #20 and I am excited to work with Ben our engineer again, as it was a really good fit. The chemistry between me and Craft-Bamboo Racing has been fantastic and I expect a really fun weekend of racing ahead in Shanghai.”