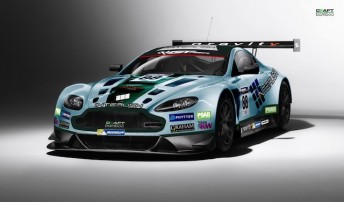 MEDIA RELEASE: GT Asia – The 2015 GT Asia Season is set to begin this weekend in South Korea, and Hong Kong’s, Craft-Bamboo Racing, is ready to take on some of the world’s greatest GT drivers and start the season on top of the podium.

The team will be running two Aston Martin Vantage V12 GT3s, a car that the team has found great success with in earlier seasons.

Craft-Bamboo Racing will be entering the #88 INTERUSH car in a special blue-green livery, which evokes memories of old Le Mans racers, while its partner, the #99 car receives a yellow-green decoration to represent Hong Kong’s iconic VLT.

The two cars will be driven by an international selection of four drivers who are focused on claiming the first round victories that will set them up to take both the drivers’ and teams’ championship.

The #88 INTERUSH entry will be driven by seasoned GT Asia driver, Frank Yu, who will partner up with Japanese GT champion, Richard Lyons.

Sure to be a formidable team, combining vast GT car experience and knowledge of Asia best circuits, they will be a pair to look out for given their successful history together. Last season they achieved second place at Autopolis, Japan and they will be intent on bettering this result throughout the season.

Venter was new to the series last year but impressed those around him with his consistently quick lap times and clean driving style.

Combining O’Young’s championship winning knowledge with Venter’s young talent, the #99 entry is going to be a great challenge for other competitors.

The race will be held at the Korea International Circuit, located in Yeongnam, in South Korea. The track is 400km south of the nation’s capital, Seoul, and near the port city of Mokpo.

A former Formula One Grand Prix host, the 5.615-km circuit features 18 turns and combines a layout that mixes both conventional and street design, providing a challenge for drivers who must adjust to the technicality of the circuit and its diverse layout.

The first round will be an eye opening experience, as teams and fans discover who will be this year’s top competitors.

With a great deal of GT Asia Series experience and a very capable package, Craft-Bamboo Racing, will be fighting to start the season on the podium and continue this winning philosophy throughout the year.

Practice for the first round of the GT Asia Series will begin on Friday, May 15th.

The pursuit of the GT Asia Championship Title would not be possible without the support of INTERUSH, Phytter, VLT, POAD, Gravity, Tunewear and FreeM.

“Last year we were on the podium for the first time in Korea and we have all learnt a lot since then. The car has undergone quite a few upgrades since last year too and we will be looking to improve on our third place result from last year. I believe we have grown stronger as team but so has the competition and we will be making sure to fight for the best result and get a good start to the season. The circuit itself is quite challenging but I really like it because it is a fun circuit to compete on.”

“I am really excited for the first round in Korea, I know the team achieved a podium there last year, so I hope we can build on that and do even better this year. It is a technical circuit but one that I rather enjoy, I can’t wait to get into the car and begin the season.”

“The competition in GT Asia has really taken a big step forward in 2015. I expect it to be a very challenging season as there are a lot of quick drivers entered in the series. It will be important to be fast, but being smart and minimising mistakes will be the key to the championship title.”

“Winning the GT Asia title is our aim this season and I’m looking forward to working with Jonathan Venter to put on a strong challenge for VLT and Craft-Bamboo Racing.”

“It’s great to be able to get back behind the wheel of the Craft-Bamboo Aston Martin Vantage GT3 this weekend in Korea. It’s a very technical track and offers a variety of challenging corners but I’m confident that working with the team we can create a competitive car. It’s great having VLT on-board this year and the team and car look great! I’m confident Darryl O’Young and I can work well together and start the season of with some positive results.”

“It is fantastic to be involved in the GT Asia Series for another season; we have a great line-up and will be focusing on building on last year’s success. The team has worked incredibly hard to prepare everything for the very first round of the season and I hope to see our two cars challenging for lead straight away!”