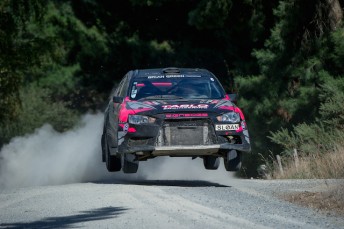 MEDIA RELEASE: Sloan Cox and the Cox Motorsport team are looking forward to this weekend’s International Rally of Whangarei held on 29th April to 1st May. Cox is pairing with last year’s co-driver Sarah Coatsworth, who managed to escape her farming commitments to compete in the second round of the New Zealand Rally Championship.

Cox last competed in this event in 2014 with Coatsworth as his co-driver. The pairing showed good speed on these roads and despite having a break from working together, they have naturally slipped back into a comfortable and confident partnership.

After the issues that surfaced at Rally Otago, the Taslo Engineering Mitsubishi Evo X has undergone a full rebuild under the bonnet. All the electrics have been checked over to find and fix the possible faults and the engine has been rebuilt to fix the over breathing problem which caused oil to come through the inter cooler system.

“I am really looking forward to Rally of Whangarei. I managed to show some good stage times during Leg 2 of Otago Rally despite the car having problems. Now that we have solved the problems I know that I will be able to attack my favourite roads with confidence” states Cox.

Coatsworth who was unfortunately unavailable for the whole season campaign states, “It is a difficult time for us at the moment but with help from family, friends and a very understanding husband, I am able to get away and compete on this great event.”

The excitement of The International Rally of Whangarei begins on Friday 29th April with the official rally start from 4.45pm at Pohe Island in Whangarei, followed by two passes of the 1.25km super special stage. After two competitive days of rallying covering 275km over 16 stages, the team will finish at the Quayside Basin at 3pm on Sunday 1st May.