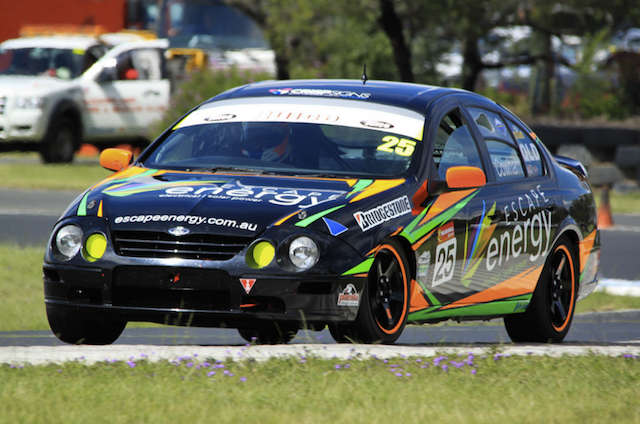 MEDIA RELEASE: Gold Coaster Coleby Cowham secured his maiden Queensland Saloon Car Series title after overcoming defending series champion Gary Beggs in an enthralling battle that went all the way down to the wire at the CAMS QLD Motor Racing Championships at Morgan Park Raceway on November 14 and 15.

Heading into the final round, the title fight was well and truly alive with three drivers, Beggs, Cowham and four time champion Lindsay Kearns remaining in contention. Beggs, with 230 points in the Coates Hire VT Commodore held a 17 point advantage over the Ford Falcon AU pairing of Cowham and Kearns, who were equal second on 213 points.

With a maximum 94 points on offer across the weekend and a tight points margin between the remaining contenders, fans were treated to action-packed racing throughout the 14 car grid.

Ashley Jarvis, who recently claimed third in the Shannon Nationals hosted Australian Super Six Series, set a 1:28.942 lap to qualify on pole in the Lighthouse Electrical Ford Falcon AU on a damp track, ahead of the Falcons of Cowham and Dion Jarvis. Beggs encountered differential issues to qualify eighth, scrambling between sessions to make it on the grid for Race 1.

Cowham took the championship lead by 11 points after a win in the first race of the weekend, finishing ahead of brothers Dion and Ashley Jarvis. Beggs charged through the field to reach as high as second, before a power steering belt failure caused by a collision on the rolling start ended his race on the final lap.

Fellow championship contender Kearns placed fifth to be promoted to second place in the series standings by two points to Beggs.

Cowham went back-to-back with a comprehensive victory in race two, taking the chequered flag 2.5 seconds ahead of Beggs, who made his way through the field from the rear of the grid to finish runner-up. Kearns failed to finish after making contact with James Kielly in his Ford Falcon AU around the T-section to end his hopes of a fifth championship.

A 16-point advantage meant Cowham only needed to finish fifth in the final race of the season to secure his first series win.

It was an epic Ford vs Holden showdown in the final race of the season, with Beggs coming home in first, but it wasn’t enough to stop Cowham who secured his maiden championship with a second place finish and a spirited drive from Kearns ensured he secured third in the championship standings.

Cowham, who finished third in the 2011 and 2014 series standings, was over the moon with his series win.

“What a weekend! Obviously I’m hugely happy with how it turned out. Its been a fun year racing with everyone and I really enjoyed the hard, clean racing with Gary and Lindsay. 5 state titles between them and top shelf drivers nationally, so its always a good day racing them and they really make you work for it.

“The last race today was a heap of fun with Gary and a great way to finish the year! We’ve got a few improvements in mind over the new year, so bring on 2016!” said Cowham

The first round of the 2016 Queensland Saloon Car series will be at Lakeside Park on March 19 and 20.