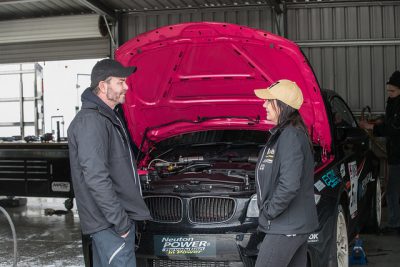 Adam Hargraves and his fiancé Sarah are making their debut in the Jacuzzi Spas Australian Production Cars at Winton Motor Raceway this weekend in the #5 MARC Cars Australia BMW 1M.

While the Gold Coast pair will marry in eight weeks’ time, Sarah is using her married name as she takes her first ever steps into any kind of racing series this weekend.

“We are getting married in eight weeks so I decided to enter under Hargraves now rather than having to change it all in two months’ time anyway,” Sarah explained.

“This will be my first ever competitive event in any kind of car, and in the wet too!

“I watched Adam race in another series at the Queensland Raceway round last month but I like the look of this category better.

“I like the longer format and being able to go at my own pace with it being all about consistency, rather than having to go out and go hard for 15 minutes at a time. I think the endurance format and the class format is good for me as I start out – there will be faster cars and slower cars and I am just hoping to float around the middle with not too much pressure in the beginning.

“Hopefully I can get out there this weekend and really sink my teeth into it, and bring it home without any damage.”

For Adam, this weekend is something very special.

“I am here this weekend for Sarah – I love being in a car so any time I am in a car on a race track I am happy. The thing is, for us this sport has been all about doing it together, so this weekend is pretty special,” Adam explained.

“I just want to race cars and I can’t think of a better way to do that than with your partner. She is the first girl I have met that wants to race with me!

“This is my first time in the Australian Production Cars. I have only been racing this year competitively in a range of different series including GT-1, production sports, GT Trophy, GT endurance….around six rounds with different series. We will be going to Bathurst Challenge next and then the Bathurst 12 Hour.

“We plan to hit Europe next year once Sarah has had a chance to cut her teeth in Australia – it is an aggressive plan!”

The Hargraves will be joined by more than 20 other APC entrants for two x two-hour races across Saturday and Sunday at Winton Motor Raceway this weekend (August 31-September 2).