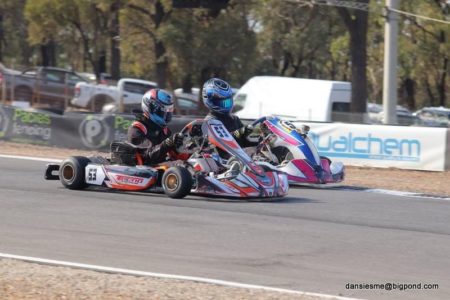 Country Kart Spares / Tecno Karts Victoria took a team of six drivers to second round of the Victorian Golden Power Series over the weekend. Shane Moore led the six drivers across four classes to their assault on the second round of the series. After a round of improvement and gains at the opening event of the season, the team were looking to continue this at Bendigo.

Aris Kyriakou and Chad Moore were representing the Country Kart Spares / Tecno Karts Victoria stable in KA3 Junior. Both drivers struggled for pace in qualifying with Aris down in position fifteen and Chad just behind him in position sixteen with plenty of work to do. Aris made progress forward in both the opening heats finishing just outside the top ten in both races. Kyriakou had his best result of the weekend coming home in position seven! Moore also moved up throughout the three heats. Chadd came home in position fourteen in heat two and then moved up to position twelve in heat three. Kyriakou had superb pace in the final and was able to move his way inside the top five and really challenge for a podium. In a great recovery Aris came home on the podium in third spot! Moore pushed inside the top ten throughout the final and was able to get his best result of the weekend coming home in eleventh spot!

Dino Maio took his spot in the highly competitive Cadet 12 field in his Country Kart Spares entry. In a near twenty kart field Dino set the twelfth fastest time and was looking to make his way into the top ten. Dino dropped one spot in heat one to position thirteen but was able to regroup in heat two coming up to position eleven. Maio didn’t have the result he was after in heat three but turned it around for the final and burst into the top ten in position nine overall!

Shannon Fisher was the sole senior driver for the Country Kart Spares / Tecno Karts Victoria stable. Shannon who is still learning the way in the senior class qualified down in position seventeen. Fisher hovered around the edge of the top fifteen in all three of the heats, coming home with a best finish of sixteenth. Shannon put in the best performance of the weekend in the final coming home in position fourteen overall inside the top fifteen.

Team manager Shane Moore spoke post weekend on his team’s results. “So proud of all our drivers in their developments over the weekend. Aris giving himself and the team’s first podium at the Golden Power Series. Lexi fisher’s first race in his brand new Tecno TR30 just missing out on the top five. Hugo finished a strong fifth overall just in front of Lexi. Dino had his first Golden Power Series finish inside the top ten. Shannon is learning heaps in KA3 Senior Light. Having only been in karting for 12 months now, she is starting to move forward. Chadd was disappointed with his performance and is looking to bounce back at the Australian Kart Championships in a couple of weeks”.