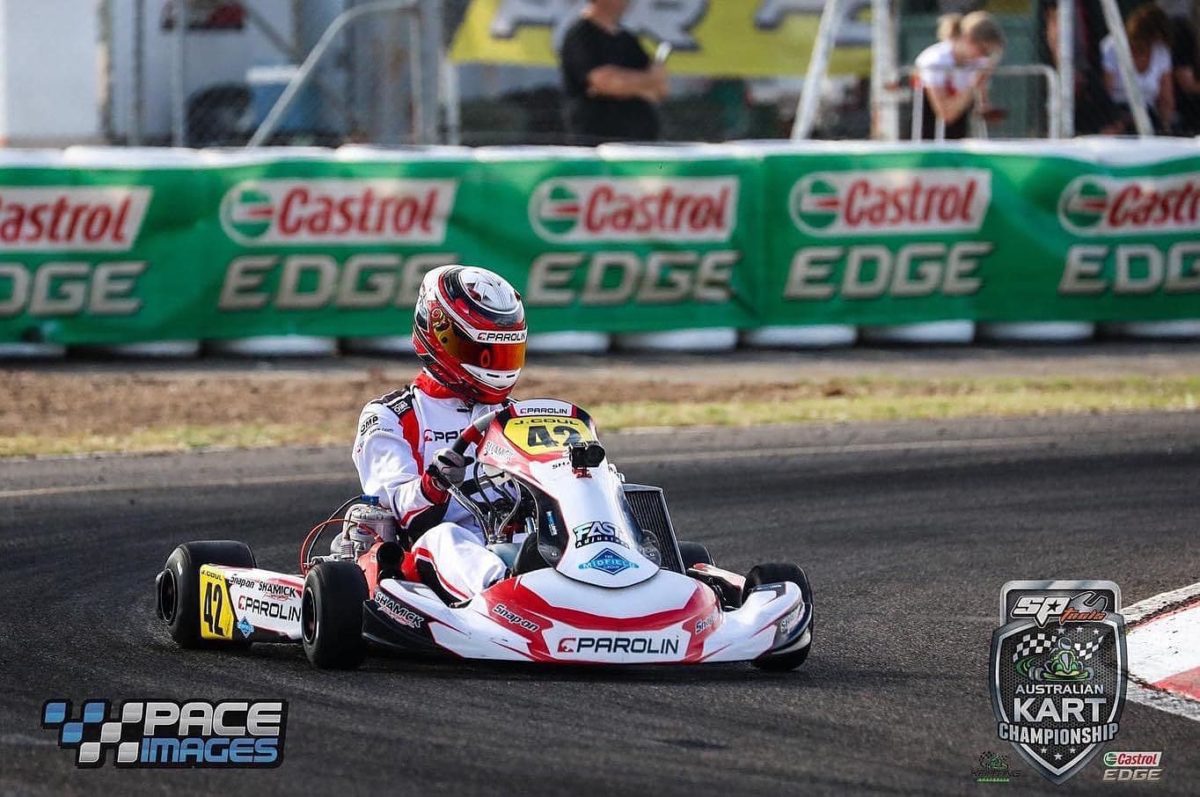 Jay Coul was back on circuit over the weekend taking on the second round of the SP Tools Australian Kart Championship. Coul, a front runner at the opening round of the series, was looking to continue his strong start to the championship and get himself up in the battle for podium and victory. Jay had near full field of KZ2 competitors to compete against and was ready to put his best foot forward in his championship assault.

The Shamick Racing / Parolin Australia team driver hit the track for qualifying and immediately put himself right in the battle to be up the front of the grid. Coul placed his kart inside the top ten in the early stages and then worked his way inside the top five and was right in the thick of the all important pole position battle. Jay was up against the best of the best and set a scintillating lap time to qualify in position five on the third row of the grid. Coul and the team now looked to the heats to grab as many points as possible.
Coul got a great start in heat one and was able to jump up a spot into position four overall. The Snap on Tools backed entry was in a battle, swapping positions for fourth, fifth and sixth in the race. Jay continued to race hard inside the top five for the majority of the race against some top level rivals. Coul came home just outside the top five in sixth to conclude heat one.

Heat two was another impressive start for Coul, jumping up inside the top three in third spot. The racing was intense and fast at the front, with the Midfield Group backed entry having a battle with Australian champion Troy Loeskow. Jay dropped down to position four throughout the race but stayed right with the top three, showing excellent speed and grabbing more valuable speed and points. Coul came home inside the top five in position four overall in an improved effort from heat one.

Jay was now starting out of position three for heat number three and got another great start, slotting inside the top three. The Shamick Racing backed entry was shadowing the back of Loeskow and championship leader Cody Gillis in an intense battle. Coul was able to move up to second position, not to far behind the race leader Gillis. In his best result of the weekend so far, Jay was able to come home in second position overall in a mega drive!

The excitement was building for Jay who was now off the front row of the grid and hoping to challenge for victory in the fourth heat. The Parolin Australia sponsored entry got a great start settling into second spot and harassing the back of the race leader Gillis. Coul was putting in his best performance of the weekend only tenths behind the race leader and looking to make a move for victory. Jay pushed as hard as he could coming to the line in second position only a tenth of a second behind the race winner.

Coul was once again off the front row of the grid and he was able to jump into second spot. The Snap on Tools backed entry was able to sit in second spot for the first half of the race but the battle for the podium spots was intensifying. Jay unfortunately was shuffled back in position while battling hard at the front. Coul came home with more strong points for his championship but finished just inside the top five in position five overall. Jay spoke post weekends of the highs and lows. “I started from the front row in second for the intense thirty lap final! I fought the whole way through but just didn’t have the kart speed with ten laps remaining and dropped back, finishing strong in fifth! We came out of this round in second overall in the Australian Karting Championship!! Onto the next round at Puckapunyal in June”! Coul will be back to continue his strong championship start at round three at Eastern Lions Kart Club.