COTA – a tale of two halves

COTA – a tale of two halves 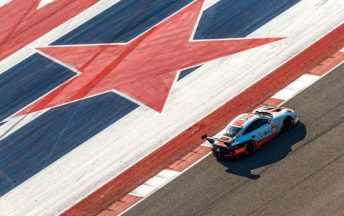 What a strange weekend – it’s hard to explain how I feel! There were some really positive moments including our Porsche leading our class during the second hour, reflecting how well we had set up the car. Sadly it all turned to nothing with brake issues costing us dearly!

Given the tight turn around we began the weekend with the same set up as Mexico. We knew this wasn’t going to be ideal at COTA, but we spent time working on finding an ideal set up throughout the weekend and in the end the car felt really good.

By the time we got to the race the car was feeling the best it has all year and significantly, we were even faster than the other Porsche in our class. This was another really huge step forward for us as a team, and I think we had a really good shot for a strong result this weekend.

Unfortunately we had another issue with the car during my stint as a result of the accident and we were forced to come in and retire the car.

Looking at the results, and where we were when we had our problems, it’s a case of wondering what might have been if we’d had Lady Luck on our side this weekend. You never know, we may just have claimed another podium for the team. That would have been more impressive when you consider this track is one that really does not suit the Porsche!

On a positive note we walk away knowing all three of us drivers had really strong pace and the car felt so good! Another massive confidence boost to the team, and it is a reflection on all the hard work and dedication Mike and the whole team have put in to this effort.

Anyway next up is Fuji – finally a track I’ve raced at! It’s also one where earlier this year I had a really strong result in a Porsche, so there are plenty of reasons to be feeling positive about strong results when WEC rolls around again!