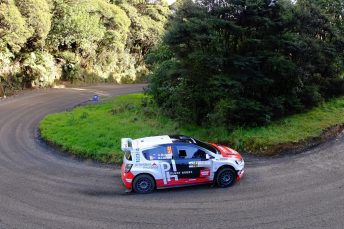 One of those weekends that motorsport can deal out is how Josh Marston assessed the Penny Homes Holden Rally Team’s first attempt at Rally Coromandel. While some top ten stage times showed the potential that both Marston and team-mate Greg Murphy know the Holden Barina AP4+ cars have, neither finished the one-day New Zealand Rally Championship event based in Whitianga.

Brakes issues dogged both Marston and Murphy from the outset – with the ongoing development of the brake and calliper package something that Marston says they have been and will continue to work hard on.

Murphy and co-driver Mark Leonard delivered a strong run through the 15.5km second stage. “We really enjoyed SS2, but the road were damp and conditions were pretty tricky for everyone. Every time we drive the car, it’s great and really enjoyable other than these niggly issues we’re still working on.”

Ultimately it was a power steering failure that took Murphy’s #51 Barina out of the rally on the fifth stage.

Marston says he struggled for grip at times with the slippery clay pulling through on the Coromandel roads having an impact. “But we had good balance and the times looked pretty good for the second, third and fourth stages.”

By stage five Marston and co-driver Andrew Graves had serious brake issues and they retired on the touring leg before SS6.

It’s back to Christchurch and the RDL Performance workshop for the two Barinas where the team will endeavour to resolve the brake/calliper package issue before the penultimate NZRC round around the Waikato town of Waitomo in October.