Coppin opts for four over two at season finale

Coppin opts for four over two at season finale 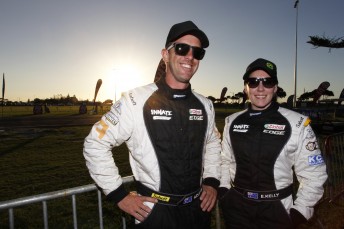 Having spent the vast majority of his rallying in front-wheel drive cars, including the past two season’s in the Citroen, and recognizing that his best path forward heading into the 2016 East Coast Bullbars Australian Rally Championship is in a four-wheel drive, Coppin announced his plans this week about the class change.

“We had a great result at Rally Australia and good speed, despite the roll over on Day One, and over the past week we’ve had a couple of important factors to weigh up in determining what we would do for Rally SA,” explained Coppin.

“The rollover damaged a few panels and it was important to get the car fixed back to a pristine condition. Secondly the car has now been sold back to Europe, so we needed to get it fully sorted out for the new owner,” he added.

Because of this, and with one eye on next season, Adrian and regular co-driver Erin Kelly will enter the competitive National 4WD Series at the wheel of an ex-Simon Evans Championship winning Toyota Corolla Group N (P).

“It’s all about continuing to build up my four-wheel drive experience, that’s ultimately why we’ve made this choice, to enter South Australia to continue my own development.”

The decision has a significant impact on the race for the Australian Rally Championship, with Coppin still mathematically factoring into the title battle alongside Eli Evans and Molly Taylor.

Eli’s win at Coates Hire Rally Australia currently has him 31 points up over Molly, with Adrian a further 45 points further back in third.

“We’re currently third in the points, not far behind Molly, and with the bonus points on offer at the last Round we could have played a part in the outcome of the Championship. This move (to the Corolla) takes us out of that, leaving Eli and Molly to have a straight fight,” commented Adrian.

Adrian admitted that despite the move into the 4WD category for Scouts Rally SA he still hasn’t any solid plans for the 2016 season. “Driving the Corolla on those fast roads I think will tell me a lot about what I need to consider for next year. It’s too early to have any solid plans, but every week we’re looking at what options might be available,” he continued.

Scouts Rally SA, the fifth and final Round of the 2015 East Coast Bullbars Australian Rally Championship starts on the afternoon of Friday 23rd October, including a brand new night stage in the Crawford Forest, and concludes on Sunday with a cash-prize shoot out around the Gawler Showground Super Special Stage.