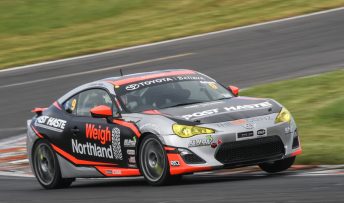 Three race winners, three changes in the points lead: the Toyota 86 Championship has a new name at the top of the points table.

Racing at Taupo’s Bruce McLaren Motorsport Park, International Motorsport driver Connor Adam has surged into a narrow two-point lead with fourth in race one, a win in race two and second in the final race of the weekend.

He deposes Tom Alexander who arrived at the second round with a commanding lead, held it despite suffering vehicle damage in Saturday’s race then lost the lead to jack Milligan when his horror weekend continued and he was last in race two. Alexander salvaged his Championship prospects with victory in the final race of the weekend.

On Saturday, Michael Scott celebrated his 23rd birthday with pole position and a flag-to-flag race win.

Scott is a Formula Ford champion and has raced both Toyota Racing Series and the Toyota 86 Championship. He put his experience to good use as the lights shifted to green, making a clean start with young Christchurch racer Jaden Ransley locking on behind him.

Championship leader Alexander found himself embroiled in mid-field battles and was only able to hold station. A tangle with another car left him with bent steering and an ill-handling car.

“We found a lot of improvements over our pace here last year and the Hankook tyres are great on a technical course like this because they allow you to move the car around a little without losing time or grip. This makes up for the hard time we had at the first round,” he said after the race. Scott also took fastest lap of the day, a 1:43.222.

Jaden Ransley’s close second placing behind Scott and his tenacious defence of that position from a charging Jack Milligan delivered him a handy points boost.

Tom Alexander still led the Championship, but had a task ahead of him in Sunday’s first race where he would start from seventh.

The following morning, the Championship took on a new direction as Connor Adam took a flag to flag win ahead of jack Milligan – that latter taking over the championship points lead as Tom Alexander’s nightmare weekend continued with suspension damage that pushed him to dead last. He could at least take solace in setting fastest lap of the race, a 1:43.230. Upholding Canterbury regional pride, Jaden Ransley came home a strong third overall.

The final race of the weekend brought some redemption for Tom Alexander, who won from pole though hounded through the entire distance by Connor Adam. The pair were well clear of the following pack, though Alexander crossed the finish line trailing his rear bumper skin.

The third step of the podium was filled by Michael Scott, banking valuable points for the series and holding Jaden Ransley to fourth with Jack Milligan fifth. Scott also set fastest time of the race, a 1:43.734

This delivers Connor Adam the Championship lead by a small margin of two points – 359 to Tom Alexander’s 357, with Jack Milligan third on 351.