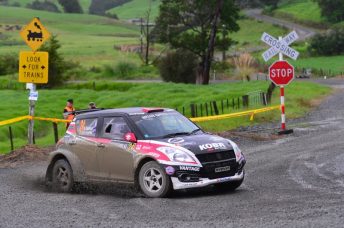 In the battle of attrition that was the International Rally of Whangarei’s Leg One, Emma Gilmour was one of the many casualties – although she was able to salvage some points on the second day.

In weather conditions that could only be described as atrocious, Dunedin-based Emma and co-driver Anthony McLoughlin slipped and slid their way safely through the first six stages yesterday in this second round of the Brian Green Property Group New Zealand Rally Championship. They kept the Vantage Windows and Doors Suzuki Swift Maxi on the straight and narrow, even posting two, top-five stage times. Going into stage seven, they were 25 secs behind the rally leader, when disaster struck.

Emma got caught out on water running across the road of a fourth gear corner. The Suzuki started to spin and as she was trying to gather it up again, Emma hit a boulder on the side of the road, which smashed the wheel.

“We changed the tyre and tried to carry on but then discovered that the steering had been damaged on impact and it was just too dangerous to continue, so we had to park up on the stage,” Emma says.

Rallying in weather that was some of the worst that she has ever experienced, Emma and Anthony were among 20 of the 45 starters who failed to make the finish yesterday.

“It was terrible, with torrential rain leaving the stages absolutely soaked. Clay was coming through in patches, which made the conditions really changeable,” she says.

Emma’s team repaired the Suzuki overnight and she and Anthony set out to salvage some points. Although the Suzuki’s set-up had been tweaked in the crash, Emma gritted her teeth and charged on to three, top-five stage placings on the final three tests, finishing sixth for Leg Two.

“We have had a pretty average run of luck lately but it was encouraging that the Suzuki ran so well all weekend. As always my team did a wonderful job and we now all turn our focus to Rally Canterbury over Queens Birthday weekend (June 4).”