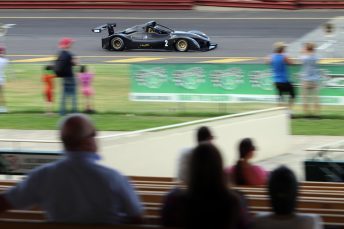 Australian Prototype Series competitors are ready to help grow the brand-new series following a successful start to the 2017 season at Sandown at the weekend.

16 cars entered the opening round, won by Radical SR3 driver Phil Hughes thanks to a pair of stunning wet-weather victories in Sunday’s two races.

Sandown marked the debut of the APS, with five different types of cars included in the field and the Australian debut of the Wolf GB08 Tornado CN-specification prototypes as well.

The new cars arrived at Phil Hughes’ Melbourne workshop on Friday evening, having only cleared customs that afternoon, and dove straight into qualifying on Saturday morning. Still, the carbon-fibre racers impressed with their out-of-the box speed and appearance.

Competitors have enthused about the open and collaborative nature of the new series and the spirit embraced in the paddock across the weekend.

“What I really like about what we are doing is the Series is associated with what competitors want and already we have invited more cars in and more classes,” said West WX10 racer Mark Laucke.

“With the different performance characteristics of the different cars what we will see is extra interest for drivers and for spectators and racing that is both more fun to watch and compete in.

“The racing over the weekend was fun, clean and enjoyable to be involved in and to watch.”

The diversity in the racing was apparent with the changing conditions – the nimble Wests enjoying the dry conditions on Saturday while the Radicals impressed with their wet-weather pace on Sunday.

“All the Wests are dry-weather fliers, in the wet they are so light, they just can’t get any adhesion so the Radicals swarm all over us, there is nothing we can do about that. It is the weight, and also with the weight their suspension becomes a little more compliant.”

Competitors who were unable to make it on track at the weekend still supported the series, including West racer Jonathan Stoeckel – who will return at round two at Winton later this year.

“It was really great to see the new series in action – the new Wolf cars are just amazing and the Radical guys were right in amongst it with quite a few new faces including the reigning Radical champ,” he said.

“To have 16 cars at the first round was really good and Phil’s drive in particular was really impressive. It is a great racing series and with such a variety of cars was really great to watch!”

“I am finding the APS really good so far – everyone is really good on-track and I haven’t had any problems,” added Radical driver Kim Burke.

“It is good to see the variety of cars out there. I am enjoying it so far and will definitely run some more rounds.”

The introduction of the P2 Kumho Cup was another concept enthusiastically embraced by competitors – giving more drivers a chance to compete for silverware across the weekend.

“I love the concept of combining more categories to have more cars on the grid,” explained P2 Kumho Cup frontrunner John-Paul Drake, who races the stunning multi-coloured West WX10.

“For me, for the sport to be successful it is all about having the most cars we can possibly have on the grid, so us combining with these other categories to me is definitely the way to move forward. Then you have racing on all levels, whether it is at the front of the pack, the middle of the pack of the back of the pack.

“I loved what I saw and I thought it was really good personally, I thought it was fantastic. It is good to see so many cars. Everyone in there was pretty good, the guys from Radical came over and they were pretty good. I think CAMS and Shannons are really on board with getting more people in the field because everyone wins with that.”

The only driver to race a Prince sports racer in the field, Mark Short, agreed with Drake’s assessment.

“I enjoyed the meeting over the weekend. I think the Series with the new cars in it generates more interest and more versatility in the cars, and more variety, I think that is good,” he said.

“As long as the racing remains close which it seems to be, hopefully it will move forward and we will gain some more cars on the grid and more on from there. All positive!”

With competitors leading the direction of the series, Drake said the collaborative nature of the way the APS was run was a major bonus.

“With the drivers’ leadership group, I think that is an unbelievable way to get success out of the series by asking the drivers what they want from a series and how that can help grow the series.”

Round one winner Phil Hughes was perhaps the most enthusiastic person in the paddock on Sunday, thanks to a pair of stunning wet-weather victories in his Radical SR3 – despite missing second gear for much of the weekend.

“It’s such a fun, non-political series with great camaraderie. I’ve worked in the GT series and have seen several others and there’s always mumbling and grumbling going on, but not with ‘our lot’,” Hughes said.

“I welcome the CN cars and hope that it grows the series in a positive way. I feel we need to keep the grass roots guys interested, like myself and Stoeckel and Mark Short – we don’t want to scare them off with intimidation. All in all it was a really good vibe, happy and proud to be part of it, and leading it!”

Hughes leads fellow Radical SR3 competitor David Crampton 103 points to 99 after the first three races of the 2017 Australian Prototype Series, with Mark Laucke equal second in the standings with Crampton.

Chris Sutton (Radical) and FL1 class leader Terry Peovitis are fourth and fifth in the championship after round one.

The next round of the Australian Prototype Series will be held with the Shannons Nationals at Winton Raceway this June.