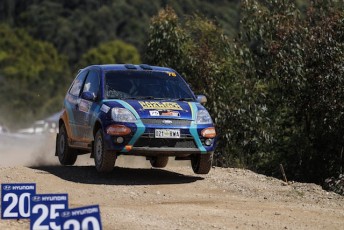 The Trade Hire Donnelly Rally follows on from the Quit Forest Rally, which set the scene for the 2015 Onslow Contracting Western Australian Rally Championship, by delivering a mixed bag of stage wins and mechanical issues to championship front runners.

“We had a light roll in Heat One of the Forest Rally, and we also damaged the transmission,” says last year’s championship winner Doug Tostevin.

“We’ve fixed the roll over damage and put a spare transmission in there for Donnelly, until we can replace it with the repaired good transmission.

“We enjoy rallying at night and we think the Subaru WRX STI suits the Donnelly course. We are looking forward to it.”

Fellow 4WD competitor Brad Markovic, is also in a race to fix the residual mechanical drama from Forest, before he embarks on Donnelly.

“Heat One of the Forest Rally was the perfect start for us – we won the state championship round and we won the ARC outright as well. We were pretty chuffed with that,” says Brad.

“Unfortunately, we then experienced engine drama by melting a piston on our Subaru WRX STI, seeing us run in conservation mode on the Sunday.

“The guys at Maximum Motorsport have rebuilt the engine, and that will be installed later in the week. The car will be fresh and ready to go for the weekend.

“Donnelly is a good rally for us. The stages are fast, and the course takes a lot of commitment to drive at the top end.

“We are starting as car five from the ballot, so we have some wheel marks in front of us, which is always a good thing down there.”

The current leader of the 2WD category, Razvan Vlad is hoping the current set-up in his Ford Fiesta survives Donnelly, and delivers him and co-driver Daymon Nicoli a good result.

“The year started out as expected, but not as we hoped for,” says Razvan.

“We had really good speed at the Forest Rally. I think it was the very first time in the past 20 years or so where a 2WD car was leading the state championship, but unfortunately we broke a driveshaft which put us behind.

“We’ve had this problem for a while now, so we’ve decided to move to a different gearbox and a different drive shaft. Unfortunately, these parts will not be available until June, so for the time being we are just going to run the old set-up and hope it lasts another rally or two.

“We’ve been competing at Donnelly for the past five or six years, and I really like the course. Our car is suited to the fast stuff, so we’ve normally done well there. Hopefully it will be a good rally for us.”

“My little Toyota turns 40 this year and I turn 60 on the day of the rally, so I’ll be taking it a bit steady on the third run to make sure we maintain our finish record,” says Andy.

“The Quit Forest Rally didn’t go well for me but at least I finished both days. It’s been a very long time since I had a DNF and I really want to keep it that way for Donnelly.

“I am privileged to have the extremely talented Mike Young from New Zealand in the co-driver’s seat. He is the 2014 Asia Pacific Production Rally Champion and is currently sitting 3rd in the 2015 APRC.

“Donnelly has the most traditional atmosphere of all WA rallies. The service park is set in the old timber settlement of Wheatley and the accommodation is the original timber workers houses. It may not be five star but it easily wins the Best Atmosphere award!”

The Clubman Cup competition is also being fiercely contested with Julian Wright and Ian De Boer, and Matthew and Jenny Gerdei, both eager to keep their Datsuns in front of the Ford Escort of last year’s Clubman Cup Champions, Carl and Tracey Rattenbury.

The WA Rally Championship has three main categories and awards trophies to top finishers in each sub category: