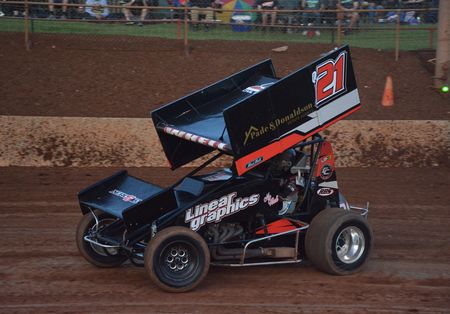 A massive night of action will conclude the 2021/2022 Archerfield Speedway season this Saturday night (June 4) with a huge program headlined by the final round of the East Coast Logistics Track Championship. Whilst Luke Oldfield has the championship wrapped up, the minor placings are still very much up for grabs, with several drivers still in contention for a top-five finish and, potentially, a place on the series podium. Also featuring on the night will be the Wingless Sprint 50-lapper, which has attracted three states and, with Formula 500s, Open Sedans and Formula 500 Juniors also on the program, a whopping 130+ competitors will take to the track.

Having dominated the series results, Oldfield has accumulated 755 points across the 13 completed rounds and is almost 200 points clear atop the ECL championship standings. Having collected five feature race wins and ten podium results, Oldfield heads into the contest fresh from his Queensland Championship triumph last weekend. Aaron Kelly sits second overall with a 31-point margin over Lachlan McHugh, whose absence this weekend opens the door for somebody else to step up and secure a top-three finish in the series. Brent Kratzmann is the best placed of those competitors who could potentially leapfrog McHugh, sitting just 36 points adrift of the defending champion. However, Kratzmann currently sits just three points ahead of Adam Butler, with Jy Corbet only 13 points further back. In fact, just 60 points separate seven drivers and, with one of these in Kevin Titman not amongst the nominations, Ryan Newton, Tim Farrell and Karl Hoffmans are poised to elevate themselves up the standings.

Of those not in contention for a top-ten finish in the championship, the likes of Bryan Mann, Randy Morgan, Nicholas Whell and Allan Woods are certainly capable of upstaging the series front runners and would no doubt love to finish their season on a high note, while Richard Morgan has also shown some strong form in recent outings to suggest he could also be a threat to the established order.

Wingless Sprint numbers have been strong all year and they will be finishing their season in style with over competitors nominated to contest the Shane Ryan Memorial 50-lapper, including a host of drivers from New South Wales and a famous name from Victoria. Heading the NSW challenge is their newly-crowned state champ Jacob Jolley from Lismore and a three-car squad from Dubbo comprising Mark, Marshall and Mikaela Blyton. Jolley has been the form driver on the east coast this season and his NSW title win last weekend in Sydney follows a series of feature race successes at several different venues, including Archerfield, that have earned him the right to pre-race favouritism. However, David Eggins and both Mark and Marshall Blyton have also been successful at Archerfield this season and it is hard to imagine that all three won’t be somewhere in the thick of the action again. Meanwhile, trekking from Victoria to take part is another family operation comprising two-time national Super Sedan champion Peter Logue and his son Wayne, both of whom bring good form into the fixture.

Of the 20+ locals looking to fend off the interstate invaders, only Robert Mazzer (2), Ben Manson and Liam Atkinson have recorded feature race wins at Archerfield this season. Others likely to offer up stern resistance include Jamie Usher, Lachlan Robertson, Andrew Robinson and Jayden O’Toole who, having finished on the podium three times this season, must be due a visit to victory lane.

The Formula 500 action is shaping as a four-way fight between Liam Williams, Tomas Partington, Kurt Wilson and Queensland champ James Kennedy, who are the only drivers to have won feature races this season. In fact, Brady Argles is the only other runner in the 17-car field to have featured on the podium and a win would certainly prove a fitting end to his season.

A field of 17 will contest the Open Sedan A events, the line-up comprising a collection of Super Sedans of varying vintages and specifications, with Barry Craft looking the man to beat. A regular runner at Archerfield and elsewhere with the Super Sedan Association, Craft will be seeking to end the winning run of Wayne Kirkman, who has prevailed in three of the four feature races staged this season.

In his quest to finish the season with a 100% success rate by piloting his Commodore to a fourth feature race win in the Open Sedan B ranks from as many starts, Ben Harris will take on a field of 20+ from which a fleet of Ford-mounted rivals such as Aaron Buchanan, Haiden Grantz, Greg Akers, Mark Anderson, Michael Cheeseman and Ricky Price will be determined to thwart his efforts.

Gates open at 2.30pm for online ticketholders, with general admission ticket sales from 3.30pm. Early racing commences at 4.00pm and the main program, which will also feature Formula 500 Juniors, gets underway from 5.00pm.