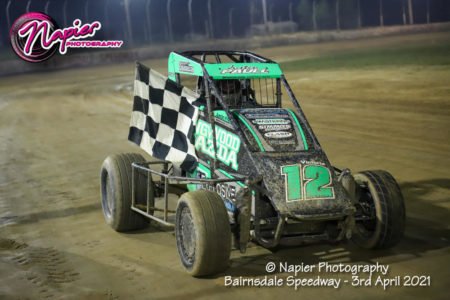 The Victorian Compact Speedcar Club has concluded a successful Easter Showdown Memorial weekend with both the Curren Memorial and Keith Astrella Memorials being won by defending champion Justin Paull at Rosedale and Bairnsdale Speedways.

Each driver would compete in three of four heats before the feature race at Rosedale and after some confusion at the venue about whom was actually in the first race and the pole position car Justin Paull being sent to the rear of the field because of the confusion, Paull still went on to win the race from Sharpe, Glen Wiles, Perry, Aaron Stubbs, and Aaron Bacon. AJ Wiles (# 32 – GTI Suzuki 1300cc – CRC – Kitten Car Care) with engine timing issues, Gavin Cooper with damage from a crash into the wall, Louis Rodriguez, radius rod damage and Mark Hutchinson with a steering arm rubbing up against a front right shock all failed to finish.

Paull starting from row three in the second heat race had to pass Glen Wiles (# 9 – R1 Yamaha – Local Village Garage) and Michael Conway and from the halfway mark of the race went on to win by almost four seconds from Conway, Wiles, Perry, Hutchinson, Tania Hallett, Andrew Burleigh, Stubbs, Bacon and Cordina.

Paull then led every lap in heat three to secure a clean sweep of his qualifying races. He had to pass Conway and Hallett early in the race and then created a gap between himself and the field. Louis Rodriguez, Conway, Sharpe, Burleigh, Perry, Hallett, Bacon, Cordina and Cooper (# 34 – R1 Yamaha – AB Flooring).

In the final qualifier for the Curren Memorial Rodriguez converted his pole position into victory in a tough no favours given battle with Conway. The two drivers bumped wheels more the once and swapped the lead between the two before Rodriguez secured the win from Conway, Sharpe, Hallett, Burleigh, Wiles, Cooper, Cordina (# 41 – GSX 1000 Suzuki – Kangaroo Lake Caravan Park), Stubbs and Hutchinson.

Prior to the Curren Memorial race Tania Hallett (# 15 – Honda CBR 1000 – Flash Heating & Cooling) was presented with the ‘Kitten Car Care and CRC’ supported best presented race car. Hallett’s machine is popular amongst the venues the club travels to by a race fan.

Paull led Rodriguez and Conway on lap one. Burleigh was making moves from within the pack and was fifth by lap two and swapping spots with Perry a legend racer from Melbourne. At the halfway point Paull was leading Rodriguez, Conway, Sharpe and Perry and Burleigh, Stubbs, Bacon (# 56 – ZX10 Kawasaki – CLR Electrical) and Cooper had all exited the race due to mechanical issues.

Hallett moved forward as Perry (# 66 – R1 Yamaha – Signs & Lines) started to have issues with the car and the chequered flag soon dropped on Paull. With a fast time of the night of 17.239 seconds, Paull defeated Rodriguez Conway, Sharpe, and Hallett to defend the Current Memorial.

Next up on Easter Saturday, the troupe headed to Bairnsdale Speedway for the Keith Astrella Memorial. All drivers from night one made the trip with AJ Wiles jumping into the number 9 car and his dad having a night off.

A great start to the evening for Louis Rodriguez (# 11 – R1 Yamaha – 1 Stop Construction Group) when he won heat one from Paull by almost four seconds. Paull, Hutchinson, Hallett, Conway, Perry who was fast back in the pack being the only driver turning a less than 17 second lap in this heat followed by Sharpe, Burleigh, and AJ Wiles whilst Stubbs continued to have mechanical issues with his car.

Paull turned a pole position start in heat to into victory and almost smashed through into the 15 second bracket clocking 16.168 as his fastest time. Rodriguez finished second, Burleigh (# 17 – R1 Yamaha – Ultimate Awards) was next in his best result of the weekend, Hutchinson, Cordina, Bacon, Hallett, and Cooper. Sharpe and Stubbs both did not finish. Burleigh’s result was all the more impressive as he was in his third day of racing without a wing ever, a practice day, Rosedale and now Bairnsdale being those occasions.

AJ Wiles (# 9 – R1 Yamaha – Local Village Garage) smashed the track ten lap record for Compact Speedcars in race three after early race leader Perry exited the race and went infield. Perry and Wiles were in a great battle at the front and when Wiles took the lead, and despite pressure from Rodriguez, he sailed to a 3:00.084 ten lap race time. Conway finished third then Hutchinson (# 6 – R1 Yamaha – Associated Powder Coating), Hallett, Cordina and Bacon. Stubbs again unable to get the 46 car to the finish.

Conway (# 77 – ZX10 Kawasaki – Power Play Road & Rally) took a heat race victory in the final heat of the night, his first win of the weekend when he held of Paull, Sharpe and Cordina. Burleigh failed to finish, and the field was set for the feature event and the chance to claim the Keith Astrella Memorial win. Rodriguez, Paull, Hutchinson, Conway, Hallett, Perry, and Sharpe (# N34 R1 Yamaha – Pinnacle Constructions Canberra) would contest the feature event.

Paull took the lead from lap one. Conway and Rodriguez resumed their battles with Conway moving into position two. On lap nine Conway gave away his second spot to Rodriguez as he spun and dropped back to sixth as he also let Sharpe, Hutchinson, and Hallett.

For the Easter Showdown overall Paull finished in front of Rodriguez, Conway, Sharpe, and Hallett.

After the weekend Justin Paull spoke about the weekend. “Thank you to the hardworking people of our club for all the work they put in to get this weekend’s event to run so well. Thank you to the clubs supporting sponsors and the venues. We hope that seeing what our club was able to produce this weekend, will turn the Memorial weekend into a bigger event next year. I had a great run and cannot thank all my team enough. Thank you to my sponsors and I am so proud to have defended both prestigious races this weekend. The Curren and Astrella Memorials mean so much to us all.” Shared Paull.