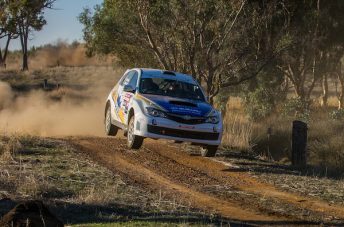 In near perfect conditions with stages in great order, Herridge / Marquet won the first four of the event’s six stages and placed second on Stages 5 and 6.

Herridge said the car ran perfectly and he didn’t need to change a thing in the 2008 Subaru Impreza WRX STI prepared by Maximum Motorsport for Graham Iddles who was unable to compete due to a date clash.

“It was a tough rally actually with a good compact course. The average speed was fairly slow around 75 kilometres per hour with lots of twisty technical sections and the gravel was slippery and loose. The car was moving around a lot,” Herridge said.

“We had the lead by the half way mark but with the afternoon sun, dust and tough stages, I thought, well, I can only lose the rally from here. So we took a tactical approach to finish on top, and yes, it feels good to a result. The amount of messages and support I’ve received has been really fantastic.

“I haven’t done a gravel rally in four years – the last one was a one-off event in Collie, and funny enough it was Jimmy (Marquet) beside me then too. Jimmy and I have only done two events together. We worked well together this weekend but there are things we can both improve on, but it was good to get a result knowing neither of us was at the limit.

“I was fairly nervous going into this rally after a decent break, I didn’t know where I’d fit in the scheme of things. The car was available at the last minute and I had a few people encouraging me to have a steer.

“I had the family with me cheering me on which was great especially since our youngest daughter hasn’t seen me rally on gravel much at all. Boddington had great spectator points so the family had as much fun as I did – anytime skidding around in the dirt is fun!”

Herridge suggested he could compete in more WARC event later in the year.

On the second step of the podium was Nick Box and co-driver Todd Payne in their Allstar Garage 2005 Mitsubishi Lancer Evo IX, finishing just 38 seconds behind the winners.

Maximum Motorsport’s John O’Dowd and Kenneth Sheil were third fastest but incurred a one-minute time penalty for an early check-in, which saw them finish in fifth place outright.

Razvan Vlad and co-driver Daymon Nicoli won the first stage, but finished all others in second, and thus finished ultimately in second place just 23 seconds behind in his MAXYRally.com.au 2004 Ford Fiesta.

In third place was Kody Reynolds and Anthony Staltari in their Trade Hire 1994 Subaru Impreza.

Half the distance of the WARC, the Clubman Cup and Clubman Masters is more accessible and aimed at enthusiasts.

The Clubman Masters is a new category in 2017 for any competitor who has competed regularly in the Clubman Cup series and has held a 2WD DPI (seeding) greater than 0.8500 for more than two years as of 1st January of any year since 2007, or has been a winner of any Championship or Series.

Winning the first two stages and the event in the Clubman Cup was MAXY Engineering’s Brock Nicoli and Daniel Adams in their 1994 Hyundai Lantra. Less than two minutes behind was MAXYRally Chris Bowley and Stephen Wade in their 2007 Ford Fiesta ST. Just three seconds behind was third place finishers True Blue Alarms Andrew Percival and Jim Pearce in their 1997 Honda Civic.

The MRF Tyres Boddington Rally was held on 3rd and 4th June and saw about 40 competitors tackle 94 competitive kilometres.

In second place in the 2WD Championship is Razvan Vlad, and his co-driver Daymon Nicoli in driver and co-driver standings respectively.