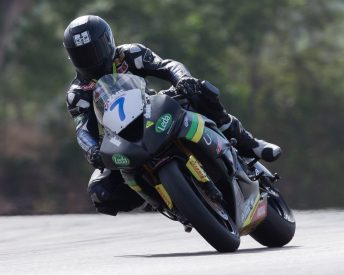 Tom Toparis and Ted Collins achieved Race One and Two wins at Round 4 Hidden Valley Raceway within the tightly contested Motul Supersport class of the Yamaha Motor Finance Australian Superbike Championship presented by Motul Pirelli (ASBK). Collins, taking out the overall round win.

Toparis (Cube Racing, Kawasaki ZX6R) took the Race One victory despite coming under plenty of pressure for the duration of the entire race. Collins (NextGen Motorsports, Suzuki GSX-R600) rode brilliantly to second position after his great start, piling on plenty of pressure on Toparis. Damon Rees (Tony Rees Motorcycles, Honda CB600RR) would be the final podium place getter.

Both Sam Lambert (Addicted to Track, Yamaha YZF-R6) and Sam Muldoon (Pro Worx Racing, Kawasaki ZX6R), would have 10-second penalties imposed on them for jump-starts. The jumpstart would prove costly for Darwin local Lambert, as he moved back to sixth place from a podium placing.

The Cube Racing rider, Toparis managed to take the lead after a brilliant start into turn one. Pole position getter Mark Chiodo (Repsol Gas Racing, Triumph 675R) didn’t take off well from his prime real estate gird position and fell back to fifth.

Toparis was chased by Collins but managed to keep the NextGen Motorsports rider at bay. Collins set a new racing lap record, 1.4 seconds faster than the previous. Despite such electric pace, Collins did not manage to find a way past Toparis at any point. Toparis did appear to experience front-end chatter during certain stages but managed to overcome those issues.

Behind the lead duo was a tough fight for the final place on the podium between Chiodo, Lambert and Rees. The battle would rage until the last lap, with Chiodo crashing at turn 14 due to the pressure for the podium. Rees would take his place on the podium after Lambert’s penalty.

Chiodo was frustrated to crash out as he threw everything he had to maintain the position. Luckily the rider was not injured and there was not too much damage sustained to his Triumph.

Collins took a sensational win in Motul Supersport Race Two, after a brilliant start to set him up for the victory. This race was full of twists and turns as the victory never looked to be fully locked away until the finish. Toparis would take second place while local rider Mick Hefferan (Quack Pest Control, Kawasaki ZX6R) would take a surprise podium place after Coote attempted to pass Toparis in the last corner, only to high side and crash heavily on the main straight.

Chiodo was an early faller, with a high-speed crash on Lap Three. The Triumph mounted rider was unhurt after the crash.

Toparis suffered a disappointing start and was on the back foot, but quickly making his way through the field at an incredible rate. Toparis managed to fight his way all the way back to second place and was on a mission to hunt Collins down for another win.

Toparis was incredibly strong on the brakes, particularly at YMF hairpin. Toparis nearly lost the front at Hi-Tec Batteries corner on Lap 12. That was the moment, which cost him the chance for a clean sweep this weekend. After the near crash, it put Coote right on Toparis’ tail.

After Collins crossed the line for victory, Coote attempted an overtake in the last corner but unfortunately for Coote he crashed after losing the front and applying too much gas. The crash handed the final podium position to Hefferan.

Collins was the eventual Motul Supersport Round winner ahead of Toparis and Hefferan.

Quotes from the riders

Tom Toparis (After Race One)

“Definitely very happy to get the win, it assists in the championship battle! The race went to plan and my lap times were very consistent. I did have a small moment midway through the race but I kept banging in the fast laps. Ted Collins might have been thinking championship and let me have the win but a victory is a victory. This has put us in a good position heading into Morgan Park. There’s plenty of spectators here and it’s been a great weekend!”

“I got a really good start, the track was very hot and slippery but I’m ecstatic to take the Race Two win and the overall round win.”