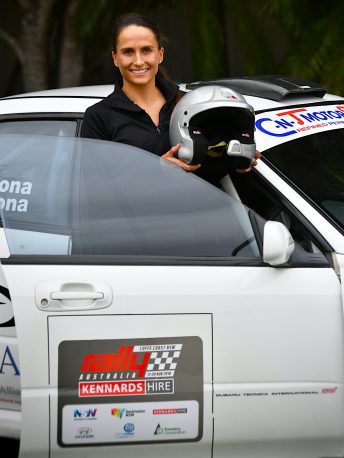 Moffatt, who grew up in the beach town of Woolgoolga, will use her position as one of the region’s most famous sports achievers to help promote not only the FIA World Rally Championship event but also the natural attractions of the Coffs Coast.

The rally runs on 17-20 November, based in Coffs Harbour, and will be the closing round of this year’s 13-country championship.

Moffatt, 32, will be a special guest at many of the rally’s main activities, including the Rally Show and Ceremonial Start in the Coffs Harbour mall on Thursday 17 November, the Destination NSW Super Special Stage at the Jetty precinct, the Flooded Gums spectator park for the final stage on Sunday and the Podium presentation celebrations back in Coffs Harbour on Sunday.

She’ll also take her first ride in a rally car on Thursday, experiencing first-hand the driving skills and bravery that make the WRC one of the world’s most thrilling motorsports.

The Gold Coast-based athlete ended her professional career at the Island House Triathlon in the Bahamas late last month, after finishing sixth in her event at the Rio Olympics, contesting the London Olympics in 2012 and scoring bronze in Beijing in 2008. She won the ITU Triathlon World Championships in 2009 and 2010.

“I’m really excited to be the new ambassador. For me it’s a totally different sport to triathlon and I think the skill the drivers have is so different to triathlon,” she said.

“It’s a very new challenge and hopefully the start of something that I’ll enjoy. I don’t think I’ll actually be a rally car driver, but I think I’ll enjoy having a ride when I’m there.

“I grew up in Woolgoolga and I’ve heard of the rally before and I know it’s run there in the beautiful bushland. I hope this will be an opportunity to help the world see the beauty of the Coffs Coast. It’s a beautiful place.

“There’s no place like home and wherever I go in the world I get asked what’s my favourite place and it is Woolgoolga. The Coffs Coast has so much to offer.

“Hopefully the rally draws people in and shows off the beautiful bushland and what the Coffs Coast has to offer.”

“As a three-time Olympic triathlete and bronze medallist and two-time world champion, Emma is an outstanding product of the Coffs Coast’s healthy outdoor lifestyle,” he said.

“Her feats in the world of triathlon mirror those of the most elite drivers of the World Rally Championship.

“She has an enormous following who we hope will now take an opportunity through her to learn more about the Coffs Coast and the WRC.”

Kennards Hire Rally Australia kicks off on Thursday 17 November with a free Rally Show and Ceremonial Start in the Coffs Harbour CBD from 4pm. From Friday 75 crews from overseas and Australia tackle 313 kilometres of competition stages, before the finish on Sunday afternoon back in Coffs Harbour.

Spectating highlights include the Destination NSW Super Special Stage beside the Coffs Harbour waterfront on Friday and Saturday.