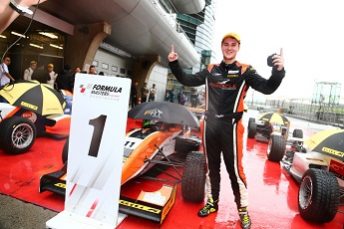 The three New Zealand graduates of the 2017 Castrol Toyota Racing Series are making their mark on global motor racing.

Pukekohe’s Taylor Cockerton (20) has won the 2017 Formula Masters Series title at the fifth and final round held at the Shanghai International Circuit over the weekend. Cockerton scored a fourth and three victories at the rain sodden meeting to head home Daniel Lu, who had started the meeting 16 points ahead.

Marcus Armstrong (Christchurch, 17) was pipped at the post and finished second in the ADAC FIA Formula 4 championship in Germany, after finishing, tenth, ninth and second in three races at Hockenheim. Victory in the last race would have given Armstrong the title if his team-mate, Estonian Juri Vips, had finished off the podium.

The three drivers are all in their debut international seasons in their respective championships and are racing fields of 32-34 cars. All three series are single-make competitions for modern ‘wings and slicks’ race cars and like the Toyota Racing Series they offer drivers the chance to hone skills and show their form in equal machinery.

The past weekend was decisive for Cockerton and Armstrong.

Cockerton was second on points going into the final round of Formula Masters, 16 points behind rival and series leader Daniel Lu. The championship went to the final race, Cockerton emerging victorious.

Armstrong held the narrowest of leads in the German F4 Championship over team-mate Juri Vips, but a technical issue in qualifying put him mid-pack for the first two races. His championship fight also went all the way to the final race, and a passionate fight-back took him to second overall in the race and the championship, just 4.5 points behind Vips.

Brendon Leitch is also fighting back after a dud engine at the most recent round of the American F4 championship robbed him of competitive speed and a podium finish. He is now ninth on points with one round remaining, but confident he can claw back into the top five. The championship finishes at the US Grand Prix on October 20.