Cockerton looks to improve at Sepang in Formula Masters Series

Cockerton looks to improve at Sepang in Formula Masters Series 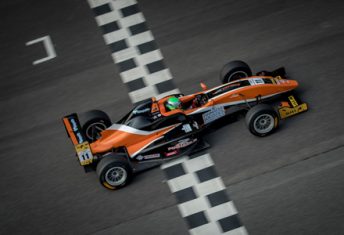 Taylor Cockerton heads back to Malaysia on Tuesday in preparation for the second round of the 2017 Formula Masters Series which takes place 5-7 May at the Sepang International Circuit. After a strong result in the opening round earlier in April, Cockerton will look for more race wins and podiums as he challenges for the overall lead in the five round single-seater series.

“I’m really excited to be heading back to Sepang,” commented Cockerton. “After finishing third overall a couple of weeks ago, I really think we have the potential to improve.”

At the first round the Waikato University student claimed his first win and two podiums from the four race program, placing him third behind Daniel Lu and Daniel Frost.

Now, having made two trips to Malaysia for both testing and racing with the Cebu Pacific Air by PRT team, Cockerton has an understanding of the Sepang circuit and the weather conditions that he will have to contend with.

“Sepang is a track that requires patience. The straights are long and the corners are wide. It is very easy to over drive the car, to push too hard into the corners that in turn means you lose speed on exit.”

“In the first round the weather changed quite a bit. On the Saturday, the weather was very hot while Sunday was cool. This plays a big part in track conditions as hot conditions really wears the tyres.”

The focus for the second round is to improve with more podiums and race wins.

“Qualifying is very important for this series; it worked for us in round one. We also need to work on improving out ‘dry’ setup. The competition is quite strong but quite different to the Toyota Racing Series where there was a strong depth of field. There are four or five very good drivers who have shown they are very quick. They know how to qualify and race well, so my target is to beat them.”