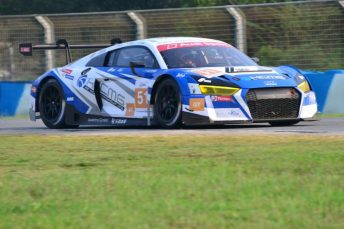 Current Formula Masters champion Taylor Cockerton heads to Malaysia for a test with the KCMG team at the Sepang International Circuit 16 January. The one-day test in an Audi R8 LMS Cup car is part of the prize for winning the 2017 drivers title which the Waikato University student clinched at the final round in China.

“I’m really excited,” commented Cockerton. “It should be a fantastic experience.”

A successful test could offer Cockerton options for continuing his racing in Asia. These include the Blancpain GT Series Asia, a multi-class GT championship predominately catering for GT3 and GT4 cars over six race weekends and the 11 round one-make Audi R8 LMS Cup series.

“The test will be an evaluation drive to see where I am at compared with their current drivers.

“The biggest challenge for me is that I haven’t driven one of these (Audi R8 LMS Cup cars) before. The advantage I have is I know the Sepang circuit well, having raced there twice last season.”

Meanwhile, Cockerton is still trying to put together a last-minute deal to race in the 2018 Toyota Racing Series that gets underway next weekend in Christchurch. It will be his third season in the category and would give him the ideal preparation heading to potential competition in Asia.

If successful, he will be the fifth Kiwi on this year’s grid, alongside Marcus Armstrong, Brendon Leitch, Reid Harker and Ryan Yardley.

For me it is unfinished business,” said Cockerton. “From a personal perspective I feel I haven’t achieved enough (in TRS). I had a win but had it taken away after being penalised for jumping the start. I want to prove to critics that I have the talent to compete with some of the world’s best young drivers.“

If successful, his Audi test would take place between the second and third rounds of the Toyota Racing Series.

“It will mean flying out of Auckland on Sunday night after the Lady Wigram Trophy meeting in Christchurch. I’d test at Sepang on the Tuesday and head back home on Wednesday in time for the second TRS round in Invercargill.”

Meanwhile Cockerton is poised to work with the MTECH Motorsport team as a No 2 mechanic during the five round Toyota Racing Series.

“I’m confident we can put a deal together to race in TRS. That would be the best outcome,” commented Cockerton. “At this point I am focusing on the Audi test and the options it could bring for 2018.”