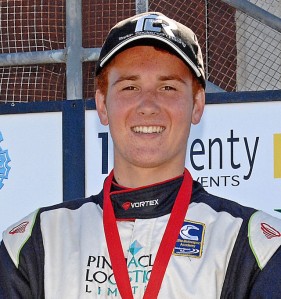 Pukekohe high school student Cockerton, 17, will be challenging both top national and international drivers on the grid when the 2016 Toyota Racing Series gets underway in Christchurch come January next year.

“Taylor is a talented young driver who will benefit hugely from the chance to work with a professional team and compete against some of the best rising drivers in the world,” he said.

It is the third year in a row that TRS has attracted the current Formula Ford champion, with James Munro and Jamie Conroy also having stepped up from the feeder category. Cockerton came to TRS after evaluating Formula Ford in Australia and the new Australian Formula 4 category.

“Taylor had a wide range of options and his decision to choose TRS opens up a world of opportunity for him. We are excited to have him on board”

Mr Boyce said the founding purpose of TRS was to give young New Zealand drivers the experience they needed to compete on an equal basis when they went overseas.

This year, Toyota has expanded its commitment to developing young Kiwi racers with the announcement of the Kiwi Driver Fund, which helps meet some of the cost of competing at the highest level here.

“Already, Post Haste Couriers have signed up to support the Fund and we are about to announce two more corporate sponsors. It’s fantastic to see the business world getting behind our young drivers,” he said.

Cockerton says TRS is the ideal platform for the step up to ‘wings and slicks’ categories. His decision was driven both by value for money and the caliber of the likely field for this year’s championship.

“It’s going to be very exciting. It’s an international series which will enable me to compare myself with some of the best talent in the world at that level. It’s proven to be a great series where we have already seen many drivers from TRS competing now in GP3, GP2 and F1,” he said.

The next step for the team is to secure full funding for the championship drive.

The five round Toyota Racing Series is contested over five consecutive weekends. It begins at Ruapuna near Christchurch in January and culminates in the New Zealand Grand Prix at Manfeild in mid-February.

The championship is closely watched by media, team managers and talent spotters around the world and television coverage of the racing is screened in more than 70 countries.