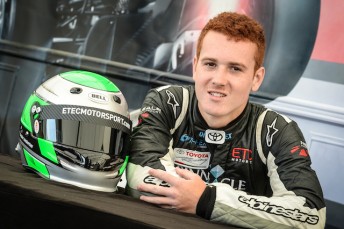 MEDIA RELEASE: Waikato University student Taylor Cockerton has confirmed that he will contest the 2017 Toyota Racing Series, the first driver and Kiwi to commit to the championship.

The 2014/15 NZ Formula Ford champion will compete for the second time in TRS and will be looking to improve on his stellar debut in 2016.

“I’m really excited to be able to confirm our commitment to the 2017 series,” commented Cockerton. “We’ve been able to confirm our budget and sponsors early so we now can focus on our TRS strategy and begin testing in the spring. We really appreciate the support coming from Barrie Thomlinson (Toyota Racing) and Steve Boyce (Toyota) in putting together our entry”

The eighteen-year-old will once again have the backing of Christchurch’s Andy Neale who engineered Cockerton’s NZ Formula Ford title win. Neale comes with extensive TRS experience having worked with a number of drivers and winning the 2014 series with Singaporean driver Andrew Tang.

“At this moment we are working closely on our key objectives for the coming season,” Cockerton commented. “Certainly we are wanting to improve on last season. We particularly want and need to improve on our qualifying efforts. Breaking into the top six will also be important.”

Last season Cockerton was able to finish all 15 races, with his best result a fifth place in the second race at the NZ Grand Prix meeting at Manfeild Park, Feilding. He placed ninth overall and third rookie on the points table.

“We certainly learnt last season the importance of scoring points. There were a number of drivers with better pace that failed to finish races. It was a big step up for me particularly in competitiveness. The international field had European drivers with top experience and a higher level of aggressiveness in both passing and defending so I learnt a lot of technique in a very short space of time.”

The five round series held over consecutive weekends starts at Ruapuna in Christchurch 14 -15 January and concludes with the New Zealand Grand Prix at Manfeild near Palmerston North on 11-12 February.

Cockerton will run with the newly formed Mtech Team, previously known as Etec. Bruin Beasley who managed Etech for Trevor Schumack has since purchased the team. Beasley formally owned Minda Motorsport which ran out of Melbourne winning a number of national single seater titles.

The Toyota Racing Series will again feature a total of 15 races – three at each round – starting with one on Saturday afternoon, followed by a Sunday morning event and the feature trophy race of the weekend on Sunday afternoon.