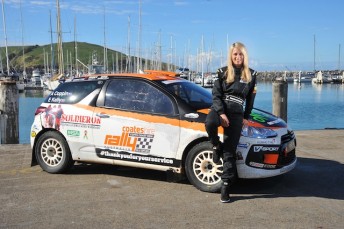 MEDIA RELEASE: Australia’s round of the FIA World Rally Championship (WRC) will continue to be known as Coates Hire Rally Australia for a third year after leading equipment hire company Coates Hire officially renewed its naming sponsorship of the 2015 Coffs Coast event today.

And the 10-13 September round will be represented as Official Ambassador by an elite sportswoman who the Coffs Coast calls its own, three-time Australian Ironwoman Champion Courtney Hancock, organisers announced at a launch staged at the Opal Cove Resort rally headquarters.

Tickets are now on sale for Coates Hire Rally Australia, which will again include rounds of the East Coast Bullbars Australian Rally Championship and Australian Off Road Championship.

The event will showcase the world’s fastest rally drivers – judged by many to be more skilled than their Formula 1 counterparts – and attract thousands of spectators from overseas and Australia to one of the biggest and most prestigious events on the New South Wales sporting calendar.

The renewed sponsorship confirms the WRC round as an important part of Coates Hire’s motorsport portfolio, which also includes V8 Supercars, Formula 1 and MotoGP.

The Australian-based multi-national company also will extend its partnership as the “Official Hire Equipment Sponsor” of the East Coast Bullbars Australian Rally Championship.

“Our company has a long association with rallying and to be the naming sponsor of one of only two FIA World Championship motorsport events in the country is a great privilege.

“The sponsorship also enables Coates Hire to showcase our ability to provide equipment services in a challenging logistical and geographical environment, with multiple sites over a broad area needing to be built and then removed over a relatively short time.”

“We have substantial logistical requirements at multiple sites over a wide region of the Coffs Coast and Coates does a magnificent job in meeting this efficiently and effectively,” he said.

While rallying is a new sport for Official Ambassador Courtney Hancock, she will be literally at home welcoming rally visitors to the Coffs Coast, having grown up in the beach town of Sawtell and started her amazing surfing career on the local beaches.

“I’m so excited to be representing the biggest sporting event that has ever come to my home region and having the opportunity to help showcase the Coffs Coast, the rally and my own sport of ironwoman racing to the WRC’s huge global following,” Courtney said.

“This is one of the most beautiful parts of Australia and now with Rally Australia it’s also one of the most exciting. I personally can’t wait for all the stars and cars and their supporters and the international media to arrive here in September.”

Introducing Courtney as Official Ambassador, Ben Rainsford said she was not only an inspiring sportswoman but also exemplified the idyllic beach lifestyle of the Coffs Coast.

Courtney achieved considerable success from a young age, but by far the highlight of her sporting career has been winning multiple Australian and Professional Ironwoman titles in 2011, 2013 and 2014.

When Courtney also won the Coolangatta Gold in 2011 she became the first person to win the triple crown of elite surf events in the same calendar year.

Adult tickets to Coates Hire Rally Australia will cost as little as $49.

A range of one-day and three-day tickets is now on sale through NRMAtix, offering access to at least two dedicated spectator points each on Friday, Saturday and Sunday.

Highlights of the 2015 event include three new Friday stages near Taylors Arm in the Nambucca region – expected to be among the most challenging on the 13-country WRC calendar – the return of the popular Nambucca 50km stage, a night stage on Saturday and the rally-closing Power Stage.