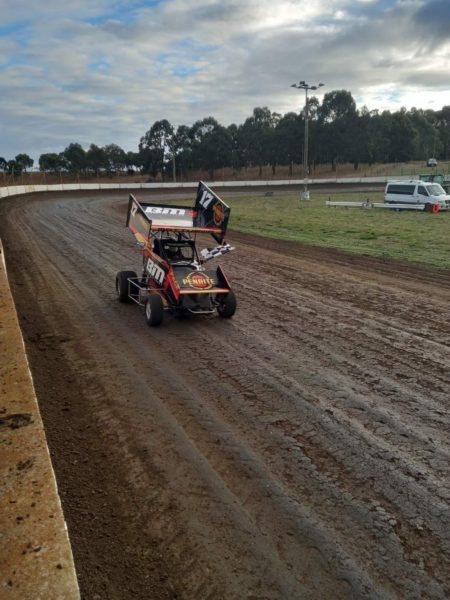 On Saturday at Mid Western Speedway in Darlington in front of a healthy crowd Michael Coad won the Super Rod Col Grist Memorial honouring the late Skipton based racer and businessman whilst Daniel Stewart won the important Standard Saloon feature event in a terrific day’s racing.

Super Rod competition for the Col Grist Memorial involved his grand sons who now compete in the class Dane Court and Billy Grist. Dane Court being the memorial race sponsor through his business interests. Over three qualifying heat races Michael Coad, Stanley Marco Jnr and Court secured victories and Coad and Jacob Pitcher began from the front row. Dane Court was third top qualifier whilst Grist after some issues in the qualifiers began last.

Pitcher got the perfect start and lead the initial laps of the twenty-lap race. Just after a restart he spun, and Coad assumed the lead of the event with Stanley Marco Jnr behind him. Court took a hold of third spot in the late stages of the race and as the chequered flag dropped and the drivers crossed the finish line the win would go to Coad from Court, Marco Jnr, Neville Gange the Victorian champion, and Pitcher.

The Standard Saloon class had attracted some racers from Melbourne and Gippsland with some exceptionally good cars and great driving credentials. Wayne Sheerman was one of them and he won the first qualifier. Daniel Stewart was another and he won the second qualifier. One of the South West’s own drivers Brent Clark won the third with Stewart the fourth before Sheerman and Stewart recorded wins in the final two qualifiers.

From the pole position Stewart took the lead and was never headed, Clark took control of the second spot and Sheerman initially third held that spot for three quarters of the race before Rhys Lansdown took the position. After twenty laps, Stewart scored the win from Clark, Lansdown, Sheerman and Patrick Vuillermin, four of the five racers new to the venue in Standard Saloon racing.

Paul Singleton the Mortlake Speedway Club President wanted to thank Stewart and the Standard Saloon racers. “I wanted to thank Daniel for taking some social media control and encouraging racers to enter our event and it was terrific to see the quality of drivers that did turn up. You boys are welcome back any time and we will see what we can do with putting on a couple events next season that you would like to be a part of.”

The Victorian Formula 500 Association brought their senior and junior fields of competitors. In the senior racing Indy Rae and Matt Turner shared wins in the heats before Indy Rae got the best of the competition in the final. Rae led every lap to win whilst Matt Turner was second until just passed the halfway point of the race before Jordan Rae passed him. Turner finished third with Jett Bell and Adam Turner completing the top five.

Blake Matthews from New South Wales clean swept the Junior 500 racing winning both qualifiers and the final. He led every lap of the final event, in fact in the thirty laps the Juniors raced for the day, he led all but one lap. Tyler Maggs was second from Jac Lanyerie, Mitchell Saunderson and Ky Young.

Dean West won two heats, Phil Jenkins the third in the Speedway Drivers Association of Victoria Hot Rods. Jenkins then maintained a lead from the start of the race to the end in the ten-lap final to record a win over West, Kali Hovey, her father Russell Hovey, and Chris Wilkes.

Rounding out the results for the whole day, Mini Sprintcars dominance was once again to Jason Lynn with two of the three heat wins and the other to Rahmon Rivero. Rivero also had a rollover and raced from then on with borrowed parts. Lynn then won the final with Rivero and Maureen Sell rounding out the placings.

Mid-Western Speedway will next fire up on May the 22nd with the Brendan Hannabury Street Stock Memorial, Super Rods will be back and Wingless Sprints and SSA Junior Sedans with classes to be confirmed still.