Clout and Waters charge to top five results at Jimboomba

Clout and Waters charge to top five results at Jimboomba 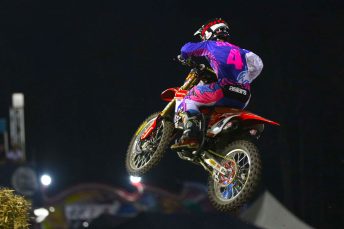 Premier class rookie Luke Clout kicked off his day at Jimboomba by qualifying in an impressive third position, before advancing directly to the main event via second place in SX1 heat two.

Following an unfortunate fall in the first turn of the 20-lap main event, Clout charged his way forward from the rear of the field in incredible fashion to finish in fourth position as the chequered flag flew.

“I’m a little bit disappointed to go down, but to come back to fourth and ride the way I did, I’m pretty happy,” said Clout. “I know I have to go home and do some work, but I know I’m right there.”

After showing promising speed throughout the entire event, Clout plans to continue building towards his goal of landing himself and the Honda CRF450R on the main event podium.

“I know my speed is around the podium, so I’m just going to go home, work hard and get on the box,” he said. “The plan is to just keep riding well and see how we go.”

Finishing in fifth place after falling with his teammate in the main event, Todd Waters remains positive as he leaves the opening round of the series in a favourable championship position following a consistent day on-track.

“We got a good start in the heat race earlier and ended up getting third there,” Waters commented. “I haven’t ridden supercross for a long time, so I’m just dipping my feet and I think the season will be good.

“Luke went down in the first turn and I was caught up in that, so I went from last to fifth at the end of the final. That’s racing though and that’s how it goes.”

Noting that raising his race intensity as his sole priority leading into round two, Waters will continue to fine-tune his training program during the short two-week break in the championship.

“I’ve got two weeks and I’ve been working on all of my motos and stuff now, so it’s now time to bring some intensity in,” he explained. “Apart from that everything is good, we’ve got the bike in a happy place, so we’ll just keep working.”

The Crankt Protein Honda Racing team will return to racing at Bacchus Marsh in Victoria for round two of the series on Saturday, 14 October.