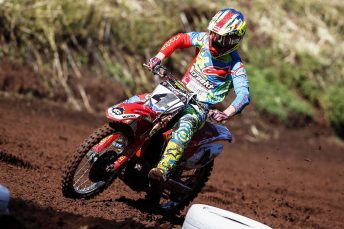 Crankt Protein Honda Racing teammates Luke Clout and Todd Waters wound up sixth and ninth overall in today’s penultimate round of the 2017 MX Nationals at Toowoomba in Queensland.

Round nine started positively as Clout and Waters were fourth and fifth respectively in the Super Pole qualifying session at the hill-side Echo Valley circuit.

In the opening 30-minute moto of the day Waters was first of the factory-backed CRF450R riders home to cross the line fifth, as Clout – who ran as high as third in the early stages – recovered from a crash to salvage ninth place.

The second encounter was an improvement for Clout as he pushed forward to place sixth, resulting in that same position overall. Waters finished in 10th after multiple crashes, which put him in ninth overall despite being equal on points with his teammate.

With one round remaining Waters maintains fourth in the championship standings and still within reach of a series podium, while rookie standout Clout is currently in seventh overall.

The 10th and final round of the MX Nationals is scheduled next weekend for 19-20 August, at Coolum on the Sunshine Coast of Queensland.