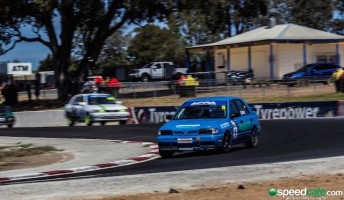 Qualifying saw 2015 series runner up Johnny Rachele, take pole for the season opener, then converted his qualifying pace to a commanding lead in race one to take the chequered flag in the opening race.

Unfortunately a penalty for a jump start changed the top 3 results post race. Lee Nuttall was then made the winner followed by Greg Wood and Johnny Rachele rounding out the top 3.

Over the course of the day we witnessed some great highlights.

In race two, Lee Nuttall was protecting his lead from the hard charging Pulsars on his tail but an oil spill from the previous race caught him out into a spectacular slide on the last turn, which sent him down to 3rd.

Race 3 and 4 brought us some nail biting battles with both races finishing with 0.2 and 0.6 second margins respectively from the top runners.

“We spent a lot of time in 2015 learning and developing the car and a pre-season test early this year also contributed to the today’s pace,” said Johnny Rachele.

“Today we had small grid but it didn’t stop us from have some good hard close racing and then having a laugh afterwards in the pits. The cars have to be driven ten tenths to keep up and fellow competitors will take advantage of the smallest mistake”.

Round 2 of the Australian Pulsar Racing Association VIC Championship is on this weekend, which includes a 1 hour Endurance race.