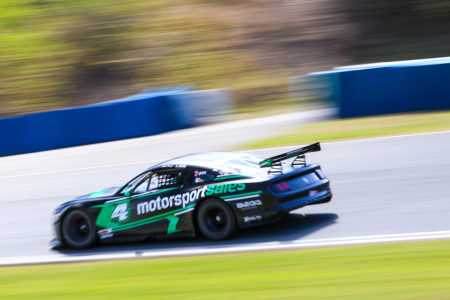 The seventh round of QRDC at Lakeside Park at the weekend saw multiple clean sweeps of categories and classes from the five series racing.

On a beautiful day at the historic track, four categories featured winners that claimed victories in each of their 4 races. While there were five class winners across those categories who also finished no lower than first.

QR Sports and Sedans was empathically won by Nash Morris in a TA2 Mustang. Morris stunningly claimed pole position on Saturday afternoon with a 54.3516, over a second quicker than fellow TA2 competitor Christopher Pappas. Pappas meanwhile only held a margin of three tenths over Sam Collins in his Nissan Silvia. The remarkable speed of the TA2s kept them at the top of the time sheets through their four races, with Morris leading Pappas home followed by Grant Elliot in his BMW M3 in each. Conclusively wrapping up the Sports class.

Sedans meanwhile were taken out by Brett Ryan in the WRX, followed by Daniel Ross in his Toyota Altezza and rounded out by the Nissan Pulsar of Brayden Mooney.

The combined category of Production Utes, Hot Hatches and Italian Challenge provided some excellent excitement throughout the day. Holly Espray clean swept the Hot Hatches class in her #777 Hyundai Excel, Mick Mcloud, also in a Hyundai Excel claimed second with Trent Laves in a Getz wrapping up third.

The hotly contested Production Utes round went the way of Scott Tamati (Ford Falcon) who scored victory in each race despite having to fight back from the rear of the field in the final go-around. Brendan Exner (Ford Falcon) and John Young (Holden Commodore) were second and third respectively.

The Historic Touring Car category of Group N brought a bit of nostalgia to Lakeside on Sunday, with a mix of Camaros, Mustangs, Escorts and Toranas all vying for the top spot. Grant Wilson in his Chevrolet Camaro came out of the weekend in the coveted spot, with Graham Wrobel (Ford Mustang) and Gary Edwards (Holden Torana) rounding out the rostrum.

It was another whitewash in Superkarts with Timothy Weir winning all four races, taking out the class (Group A) and category. Group B’s podium consisted of Douglas Amiss, Liam Hoy and Kyle Schroeder. The third class (Group C) was won by Peter Nuske followed by Paul Buckley and David Dyson.

The spectacle of Formula Vee racing certainly didn’t disappoint on Sunday, with close battles through each of the four races. Alex McDonald however won each of them. Rounding out the top three for the weekend was Timothy Alder and Alex Hedemann.

There will be some exciting news in the coming days for confirmations of QRDC Round 8, please stay tuned to Queensland Raceways’ website for more.