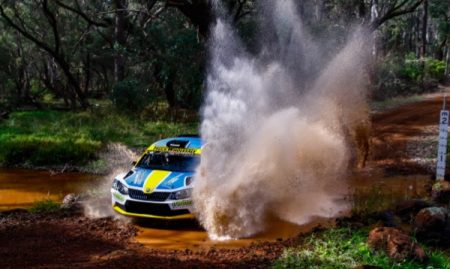 There was no match for the most powerful car on gravel in the second round of the CAMS Zestino Tyres Western Australian Rally Championship (WARC), the Trade Hire Karri Rally held on Saturday (11 May).

O’Dowd said that his car gave him an edge; the R5 is a level below a World Rally Car and used in Europe in WRC2 events.

“I’m becoming more familiar with the car and I definitely feel like I have an advantage – on the long straights we reached speeds in excess of 180 kilometres per hour,” O’Dowd said.

“The car is awesome. The stages were good, especially the first two stages, the third one was narrow and sandy. We had a good clean rally, which was tight technical in some parts and I believe I can go faster.

“I’ve had some coaching from Alister McRae [former World Rally Championship driver] which has helped me immensely to get more familiar with the car and what it can do, as well as improve my driving.

“Toni did a great job, as did Race Torque who prepare the car. It was a well organised event and I’d like to thank all the volunteers. I couldn’t be happier, it’s a good start to the championship for us. Absolutely!” said Gooseberry Hill resident O’Dowd.

“I loved the rally and the roads were amazing. John drove exceptionally well, he deserved the win,” Searcy said.

“We were running further down the order and copped a bit of dust, the second run of stages was difficult because it was very dusty. I couldn’t see 15 metres in front of me.

“It was only the second day in the car on gravel for me and there are still things we can do that will make us quicker.

“The crew worked really hard over the last few weeks to turn the car around since Forest Rally, so I’m glad to bring the car home to them and we can continue to develop it for the next rally.”

“Archa has done lots of co-driving in the past but not with me and he did a very good job,” Oxley said.

“We were the first car on the road which was slippery and we were quite ambitious trying to catch the Skoda R5, but our ambition faded when we clipped a log at the water splash and badly bent the suspension, making handling difficult. During service we got a spare part from Maximum Motorsport which made the suspension fifty per cent better, but still the handling was bad. We finished the last three stages and were able to finish in third overall, which is a good result.”

Clerk of Course Neil Trethowen said that sunny weather with mild sunny conditions was perfect for a rally and added that the stages were in excellent condition.

On SS5, there was an incident involving car 15 which reportedly went off the stage and hit a tree stump. Both driver and co-driver are in stable condition at Royal Perth Hospital and are in good spirits. Stage 5 and Stage 6 were stopped because the medical crew were attending to the incident and stages can’t be run without an available medical crew. The top three in WARC had already finished and results weren’t affected.

Results in the 2WD Class are provisional.

In the 2WD category, finishing on the provisional top step was Razman Vlad with his wife and co-driver Ioana Vlad in their MAXYRally Ford Fiesta ahead of Andrew Pinker and Caleb Ash in their Hyundai Excel in second place, and Glenn Alcorn and Shaun McMacken in their Alcorn Body Repairs Ford Escort rounding out the top three.

“The car was perfect, no issues at all. It was a close fight with Andrew Pinker and he did a good job in my old car, the Hyundai. He was ahead of us after four stages, then we managed to get ahead of him in the last split, but it’s come down to derived times after the incident, which is unfortunate but the way it happens sometimes,” Razman Vlad said.

His wife Ioana used to call notes but stopped seven years ago and this was her first rally back in the co-driver’s seat.

“It was difficult in some spots because of the dust, but we didn’t go off, so obviously Ioana did a good job. She enjoyed it and is going to jump in again at Boddington,” Razman said.

“The Karri Rally was a good event and a good combination of fast and technical stages that were in very good condition. I thought it was a good idea with the spectator point so people could see rally cars in one spot with shorter intervals. I’m looking forward to the next rally.”

With no other contenders, the sole entrants of the Clubman Cup and Club Masters are both winners of their class.

In the Clubman Masters, Lance Stringer and Chris Parish completed the Trade Hire Karri Rally in their Lawnswood Nissan Silvia.

The next round of the WARC is the MRF Tyres Boddington Safari held on 2nd June 2019.