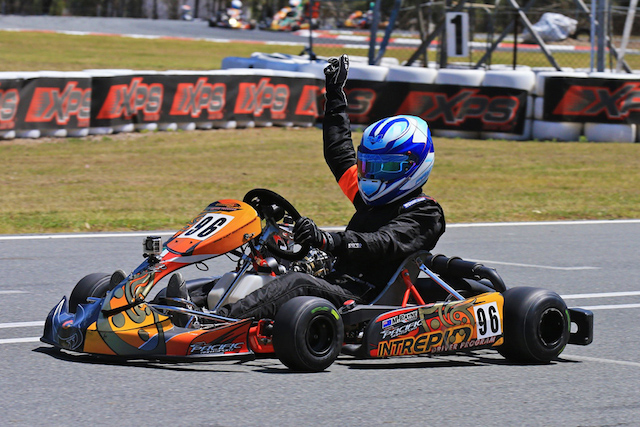 MEDIA RELEASE: He’s won rounds in his class in Australia before this season, but young Pukekohe karter Matthew Payne went one better at the Grand Final meeting of Australia’s Rotax Pro Tour series in Queensland over the weekend – he completed a winning clean sweep.

After setting the pace with the quickest time – a 49.673 – in qualifying for the Junior Max Trophy class the youngster – who turned 13 over the weekend – not only won all three heats on Saturday, he won both the Pre-Final and Final on Sunday, soundly beating overall series class winner Reece Cohen into the bargain.

Cohen was second quickest in qualifying and finished second in the first two heats but was pushed back to third by Eastern Creek round winner Lucas Lichtenberger in the third.

Cohen was back in second in both the Pre-Final and Final though, claiming – just – enough points to take the class series’ title.

Heading into the Grand Final round Payne was in second place in the series points standings with a chance of beating Cohen to the title if he won at Ipswich and the young Australian driver finished outside the top three in the Pre-Final and Final.

Cohen knew what he had to do, though, and by following Payne home each time on Sunday the title was his with Payne second overall for the series.

Up until the weekend’s Grand Final Payne was the only Kiwi competing in the class.

At Ipswich, however, he was joined by Jaden Ransley from Christchurch and Sam Wright from Auckland.

Ransley qualified third quickest before a 6-4-7 run through the heats, and a sixth in the Pre-Final before just missing out on third place to cross the line fourth in the Final.

Wright qualified 16th and after a best heat result of 12th finished 15th in both the Pre-Final and Final.

Best of the rest of the Kiwis competing at the meeting was Rotax Max Challege of New Zealand Junior Max champion and 2015 representative Dylan Drysdale who finished eighth in the Junior Max class Final.

Older brother Josh Drysdale, who now lives and races in Australia, finished 13th in the DD2 Final after a spirited drive from the back of the grid thanks to a dnf in the Pre Final.

The Stewart sisters, Madeline and Ashleigh, from Wellington, had mixed results with Ashley reasonably satisfied with a 24th place finish in the Rotax Light class after not finding a chassis set-up to her liking.

Younger sister Madeline also struggled to find a set-up she could work with in qualifying but got as high as 16th in the heats and worked her way from P41 in the Pre-Final to P34 at the flag.

She had also made up at least ten places off the start of the Final only to be hit off the track in the third corner.

Key to the issues the sisters – and many other drivers – had was rubber build-up on the track, as Ashleigh explains.

“Track conditions at Ipswich were particularly challenging. When we first arrived there, the track had a lot more rubber on it than usual which gave it a lot of grip. The drivers that had done a lot of testing were very fast, 3 or 4 tenths faster than last year.

“Others, including some locals, were finding the conditions quite challenging as the grip gave the karts a lot of initial turn in but then the back would slide out. As the temperature rose during the day, over 30 degrees, on Saturday and Sunday, the track changed and the rubber became quite sludgy. We never managed to get on top of the kart set up.”

Also out of luck was Palmerston North driver Brendon Hart who qualified 16th and got as high as 11th in the first Rotax Heavy class heat but failed to finish the third heat, Pre-Final and Final.