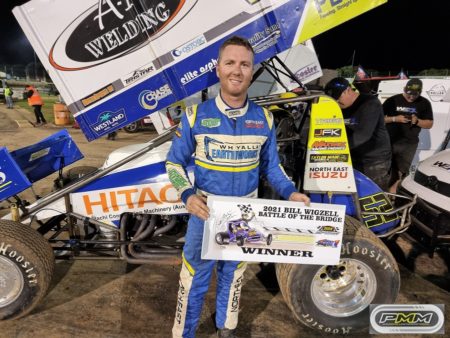 Matt Egel and the Whyalla Earthworks Racing Team continued their winning ways on Saturday night, this time at the Murray Machining and Sheds Murray Bridge Speedway as Egel finally added the Bill Wigzell Battle of the Bridge to his growing resume. In fact, Egel finished the night unbeaten as he emerged quickest in flight 2 in Time Trials, won both of his heats and led all 30-laps in what an impressive driving display in front of a sizeable early season crowd was.

With 16 cars fronting for the first Sprintcars SA event of the season the field were seeded into two groups of 8 with the night beginning with qualifying with Mount Gambier’s Glen Sutherland (11.717) pacing flight 1 and Matt Egel setting the quickest time in Flight 2 (11.830).

With the opening round of heats seeing the fast cars start up front Sutherland turned his pole position into a heat win ahead of Ryan Jones and Brad Keller, who moved forward from position six. Heat 2 was similar with the front row finishing first and second as Egel defeated Daniel Pestka. After starting fourth Luke Dillon crossed the line third ahead of Ricky Maiolo, who fought back after a spin in turn two.

The second round of heats saw a top six invert with Keller using the invert to his advantage to win comfortably after passing early race leader Hayden Pitt. Jones would finish third ahead of Steven Caruso and Sutherland.

Heat four would see the night end for debutante Ryan Alexander as he destroyed the Perrett Family owned #98 after a viscous crash in turn two in a multi car accident that also involved Ryan Jones and Max Vidau.

Therefore, after the heats had been completed Egel topped the points chart with Sutherland, Jones, Keller, Ben Morris, Maiolo, Caruso and Pitt qualifying in the top half of the field.

As the green flag fell on the 30-lap finale Sutherland would get the best of the start as he swept from the outside to lead early but the race would be stopped as Ricky Maiolo spun in turn four, with the car performing a huge wheel stand before gently falling onto its side. Maiolo was able to restart as the only damage sustained was a slightly dented inside wing board

On the restart Egel would take the lead with Sutherland being passed by both Jones and Keller before the competition of lap 1. From there Egel would stamp his authority on the race as lapped the venue just inches from the concrete wall. The battle for second was entertaining as Jones and Keller traded places with Jones getting the better of Keller to claim the runner-up spot.

The only caution of the race came on lap 23 as Sutherland’s impressive night ended as he spun in turn 2 and was collected by Daniel Pestka. Just prior to caution Jones was starting to close on Egel as they negotiated lapped traffic.

Hayden Pitt made a great return to racing after sitting out last season as he claimed fourth behind Egel, Jones and Keller, while Luke Dillon charged from position nine to record a top five result. Ben Morris had a strong night as he finished sixth while Steven Caruso, Maiolo, Vidau, Lachlan McDonough and Chris James completed the finishers.