A classic Safari course for competitors on leg 2

A classic Safari course for competitors on leg 2 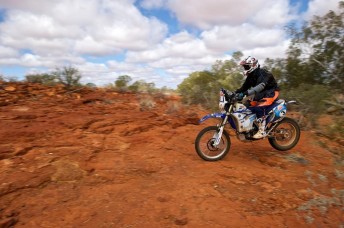 Shane Diener is out of Leg 3 with a finger injury

The tightly fought battle between the top Auto teams of Riley/Doble, McShane/Hayes and Purshouse/Hynes continued, with Steve Riley admitting the current pace of the three cars is ‘unsustainable’.

“We had a decent day with no navigational errors and no flats. We passed McShane a couple of times. We can’t catch him, because when he gets on the flowy stuff he is off like a scolded cat! So we rely on him to go the wrong way and he did a couple of times,” said Steve.

“We had a couple of wild offs. The current pace of the top cars is not sustainable, but it’s time to punt hard and take the consequences later.” 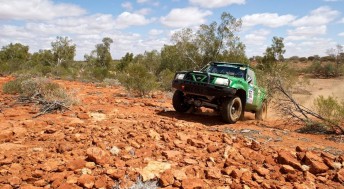 Dave McShane and co-driver Bill Hayes had a more eventful day in their Toyota Tacoma, when a couple of tyre punctures and then a broken drive shaft had them complete the last 80 kilometres of the second stage in two wheel drive.

They weren’t the only ones having driveshaft problems. The Ford Ranger of John Purshouse and Murray Hynes sheared a pinion off the front differential, leaving them to finish the last 200 kilometres of the stage also in two-wheel drive mode. That was not the last of the team’s mechanical dramas, the clutch failed 40 kilometres from the last stage, and then they got a flat tyre.

Greg Scanlon and Liam Nunn had a consistent drive in their Nissan Patrol, allowing them to move up to second place. “For us it is about driving at 90% and then being able to be there at the end of the week. Our car is a bit of a sleeper – it’s had a triple bypass all round, and I’ve tuned it myself. It’s all about reliability,” said Greg.

Garry Connell of Team Artic Cat G2 Rallye Racing slipped from top spot yesterday, when a hefty time penalty was placed on the driver for accepting outside assistance. This made way for privateer Polaris driver Simon Clifford to move into first place.

The day didn’t go to plan for Yamaha rider Shane Diener, when an off almost two hours into the first stage broke a bone in his finger. Due to his injury, Shane will not be starting Leg Three.

Shane’s team mate Rodney Faggotter continued his stellar run, posting the fastest time in both stages. “Had a really good day, it all went to plan for me. I copped a bit of wire and broke a speedo cable, which would’ve put me back a couple of minutes, but I still won both stages so I’m really pleased,” said Rod.

“It is a shame for Shane, would of loved a Yamaha one, two – that’s what we’ve been working towards all year.”

With Shane’s injury, American rider Quinn Cody now moves up to second place. “Quinn’s not shabby, and he is really good at navigation. Once he settles into the Australian terrain, he’ll be really quick, but hopefully there’s not enough time for him to do that,” said Rod.

The day was not without drama for defending champion Heath Young. “I hit a creek crossing in the first selective going a bit too fast and broke the tube to the vacuum pump, causing me to run out of fuel every 1.3 kilometres.”

“I had to keep reaching down to manually pump the primer, this caused my navigation to become a little average. I also had a few electrical problems, and basically ended up playing follow the leader because my navigation wasn’t working properly. I was just a passenger today, following everyone’s dust, hoping they were going the right way,” said Heath.

Despite all the issues, West Australian Heath is still overall quad leader, although John Maragozidis is now not far behind. “I saw that Heath was having mechanical issues in the second stage. I was able to pass him, and then keep him behind me for the remainder of the day. I haven’t ridden in six months, so I’m just taking it easy. I’m nursing a head cold and don’t want to break myself or my machine,” said John.

The event remains in Gascoyne Junction tomorrow, where competitors will be competing in the shadow of Mount Augustus. It will be another tough day on vehicles and drivers, with both stages totalling just over 400 kilometres.

The Australasian Safari is known as Australia’s version of ‘Dakar’ and attracts top endurance motorsport competitors from around the world. Competitors embark on the seven day rally on September 19, and travel over 3,500kms through the Western Australian outback before crossing the finish line on Kalbarri Foreshore on September 27.

For more information on Australasian Safari and the latest results visitwww.australasiansafari.com.au. Updates are available on Facebook and Twitter at @austsafari and check out the video updates on our YouTube channel – AustralasianSafari.