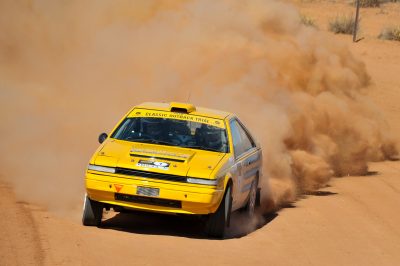 Three-time winners and defending Classic Class champions Andrew and David Travis have kicked off their 2018 Classic Outback Trial by going fastest on the 13km prologue stage in their V6 powered Nissan Gazelle.

Following the ceremonial start of the event at Lasseters in Alice Springs, in the basking sun and under clear blue skies the field of 38 competitors set off for the prologue in their machines at the Finke facility just outside of town. The Travis’ set the benchmark in 2016 and have displayed no signs of slowing down as they set the fastest time, 20 seconds clear of the Viking Motorsport Escort of Jorge Perez Companc/Jose Volta. A mere nine seconds covered the next five cars.

The MV Solar entry of Michael Valentine and co-driver Jason Fraser were spectacular at the Finke track, throwing around their Datsun to finish seventh, a fine achievement after a tireless three weeks rebuilding their car after rolling it at the recent Buladelah Rally. Belgian pair Joost Van Cauwenberge and Jacques Castelein (Porsche) were eighth, with Shane Atwell/David Moir (Falcon) and Ian Swan/Val Swan (Volvo) rounding out the top 10.

With the prologue complete, the action heats up today with the first day of competition which will see teams covering five stages and 117 testing kilometres to the south of Alice Springs. Results for the event can be found at: http://www.rallyresults.com.au/cot/results2018/ and further information at: www.classicoutbacktrial.com.au

Lasseters is the centre of entertainment in Alice Springs with three restaurants, three bars, a sports lounge, night club and an international standard casino with tables and electronic games as well as free wi-fi property-wide. It features 4½ star hotel rooms and suites and offers access to a resort-style pool, spa and health club.

The Scouts Association is one of the biggest youth focused organizations in Australia. With its foundations dating back to 1911, its aim is “to encourage the physical, intellectual, emotional, social and spiritual development of young people”. Scouts NT works together with young people of diverse cultures in local communities to assist in the development of skills such as working in teams and independently through a range of activities.

RallySafe is the leader of the next generation of rally management systems; designed from the ground up, by rally people, for rally people. Combining world-leading sensors and communication platforms into a robust, lightweight package ideal for all forms of rallying & offroad motorsport, RallySafe provides a huge range of features in four key areas; safety, timing, tracking and management.

The purpose-built system has been developed specifically to allow RallySafe to make motorsport safer, more accurate, more accessible for spectators and easier to run for marshals and organisers. Read on to learn more about the system, and if you’d like to enquire about using RallySafe at your event, please don’t hesitate to contact us.