Clarke wins a Grand, Giacometti wins a Rumble, and Santa lights up the night at Nyora

Clarke wins a Grand, Giacometti wins a Rumble, and Santa lights up the night at Nyora 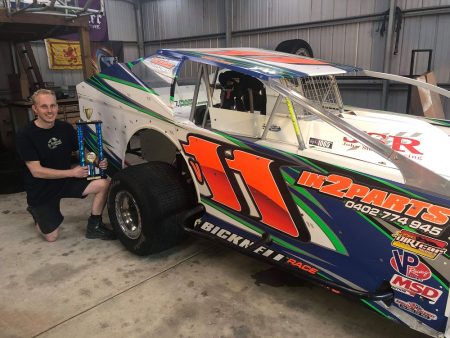 What a huge night for the family and speedway fans at Nyora Raceway on Saturday, when no less than ten race categories competed through 6 hours of racing. There was Brett Clarke taking the Mornington Motors Grand in the Hand victory for Dirt Modifieds, Darren Giacometti the Rumble in the Jungle win in the Street Stocks and not to forget the spectacular fireworks display from Peninsula Fireworks and the visit from Santa for the kids.

The Dirt Modfiieds competed in two heat races and the feature event with Clarke winning the first heat race from Jason Andreatta and Andrew Katz, whilst the second heat race was waved off track after three attempts to start failed to get the cars through the race.

The feature event though got underway and it would be Clarke who was raised local to South Gippsland taking the win over Andreatta, Mark Topperwien, Ben Hodge and Katz.

Matt Nelson got the Rip it Up Towing Street Stock Rumble underway with a win in the first heat race whilst Adrian Lawrence won the second heat, Giacometti the third and Nelson again in the fourth heat. There was a Street Stock top six dash and Giacometti won that ahead of Lawrence and Nelson.

In the feature race for a long time Lawrence held the lead and when challenged fended off the challenges and looked good for a win. A flat tyre would put him out of the race and Giacometti took over with Nelson putting the pressure on.

Nelson hit the lead and would cross the finish line at the front of the field, only to copy a penalty from the stewards after they showed an unfurled protest flag towards Nelson during the race. Giacometti took the honours in the Rumble from Nelson, Dylan Campton, Mark Miles and David Barrie.

Junior Standard Saloon racing seen the sequel to the Courtney Meakins and Rhys Lansdown Girlfriend and Boyfriend battle and this time despite Meakins making an early run in the lead Lansdown would make a pass and go on to win from Meakins, Deegan Benson, Lewis Williams and Damon Ingram.

Darren O’Brien won his first ever final when he took a win in the Sports Sedan class ahead of Broderick Stray, Darron Conder, Scott Angus and Troy Glassborow. O’Brien got the best of Angus after a great early battle between the two.

Grand Prix Midget racing produced a first ever feature race winner also with Shawn Ward winning their final ahead of Jason Crawford and Sean Denning. Ward finally found some consistency in the car after replacing fuel filters and other bits and pieces during the week.
The feature event was robbed of some of its stars after an on track incident in heat one leaving two cars heavily damaged knocked out the Australian champion Trevor Perry and the New South Wales champion Danny Stainer.

Sean Lister warmed up for the upcoming Victorian Unlimited Sedan title at Nyora with a win in that class ahead of Darryl Nicolson, Daniel Unternahrer, Trent Susol and Bob Price.

A great battle in the Standard Saloon feature race between Marcus Reddecliffe and Mark Miles finished with Reddecliffe in a car built by Miles taking the win. Reddecliffe had the lead early, Miles made a great turn one pass and was set to run away with a win however the door opened for Reddecliffe to get back past and go on to win with Brad Hill in third, Cory Horter and Justin Smith rounding out the top five.

Finally, the Division 2 Hot Rod final was won by Scott Laidlaw ahead of Melissa Tatterson, Jason Seymour, Rob Tatterson and Gavin Allman. Laidlaw led from start to finish and won the earlier two heat races for the class.