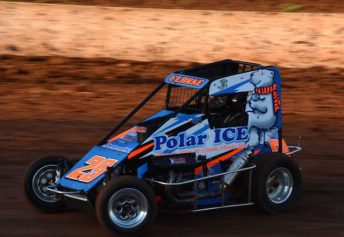 MEDIA RELEASE: There was simply no stopping Adam Clarke on his way to dominating the opening round of the Diamond Air Midget Super Series at Ausdeck Patios Archerfield Speedway on Saturday night (November 5).

The three-time national champion was the dominant performer throughout the night, clocking the quickest lap in time trials, collecting a heat win, finishing as top qualifier for the dash and then winning the 6-lapper to secure pole position for the Stan Burrow Stampede feature race in which he subsequently led all 30 laps.

Fresh from a feature win last weekend in Sydney, Michael Stewart continued his good form with a strong drive into second spot ahead of Nathan Smee, with Rodney Harders racing into fourth ahead of Paul Murphy in a race that saw less than half of the 18 starters make it to the chequer.

Clarke stopped the clock at 13.316 in qualifying to finish comfortably atop the time sheets, with Stewart hitting the track late in the session to record a 13.558 to finish second best. Troy Ware, Rusty Whittaker, Scott Doyle, Brendan Palmer and Darren Vine were next best ahead of Kiwi Chris Gwilliam, Smee and Chris Singleton.

Murphy got the heats underway with a strong win in the opening clash, leading Mark George and Smee to the line. Brendan Palmer enjoyed an inauspicious start to the night when he tipped over amid the turn one scramble for track position.

Heat two saw Rob Stewart scoot away to a sizeable lead before Gwilliam closed in during the latter stages of the race to finish just half a second in arrears, with Doyle some eight seconds further back in third spot.

Heat three was an absolute humdinger with Dean, Whittaker, Vine and Clarke engaged in a great scrap at the front. Having climbed as high as second from the back row, Clarke erred in the final corner to surrender second spot, leaving Whittaker and Vine to follow Dean home.

Aidan Corish led for much of heat four before succumbing to Smee’s advances, with Corish clinging to second spot despite a whirlwind finish from third-placed Ware.

Another backrow start proved no obstacle for Clarke in heat five, charging home to finish ahead of Vine and Michael Harders.

Dean doubled up to win the final heat, but with a bit more breathing space on this occasion as he led Whittaker and Brad Young to the line.

Despite, as top qualifier, selecting a four inversion for the IGA St Georges Basin Dash, the setback proved a minor blip on Clarke’s radar and he wrapped up pole position for the feature race by taking out the sprint ahead of Vine, Smee, Whittaker, Ware and Stewart.

Matt Hunter, Corish and Mitch Haynes filled the first three placings in the B Main, leaving Charlie Brown to finish fourth in the final transfer spot and sneak into the feature.

The first attempt to get the feature race underway was interrupted when Corish spun to a halt in turn two, while the next effort only lasted a lap before Troy Ware rolled in turn four, an incident that resulted in upwards of half a dozen cars stopping on the track and finding themselves at the back of the train for the restart as a result.

Having gazumped Smee on both starts to slot into third, Whittaker had advanced to second until he got out of shape in turn two and was hit by Young, ultimately putting both drivers out of action.

Underway once more and Clarke led Vine, Stewart, Smee and Matt Hunter, who had jumped 10 spots in just one lap as a result of the misfortunes of others.

Vine’s hopes disappeared on lap nine when he headed infield, where he would soon be joined by Hunter, Ware and Brendan Palmer, who had put in a great drive to be running fourth after starting 12th.

Doyle, Singleton, Mitch Haynes and Charlie Brown would also fail to go the distance, leaving Clarke untroubled in leading home Stewart and Smee, with Harders emergeing as the best of the locals in a polished performance.

Murphy bested Dean for fifth, with George, Harders and Corish completing the finishers.

The Wingless Sprint 50-lapper produced some terrific racing through the first half of the race with David Eggins, Glenn Wright and Harley Bishop involved in a titanic duel for the minor placings that soon became a fight for the lead when Adam Butler headed infield on lap 16.

Wright inherited the lead, with Eggins making his way to the front on lap 18, only for Wright to reclaim the top spot a lap later.

From this point, Smee was unstoppable and saw out the remainder of the 50 laps at the front of field.

A spin by Eggins on lap 23 ended his hopes and from here the race became a battle for survival as Wright staved off a challenge from Mason Cattel to remain in the runner-up position, while Steve Thomson, Brad Claridge and Matt Wright were the only others to go the distance.

Heat wins were shared between Butler, Wright, Eggins and Cody O’Connell, who exited the feature after launching over a spun Warren King with 12 laps to run.

James Kennedy, Kaydon Iverson, Liam Williams and Ethan Eyears shared the spoils in the Formula 500 heat races, but it was Williams who again proved unstoppable in the KRE Race Engines feature race, leading throughout from pole position to finish ahead of Kennedy, Tristan Johnson, Bryn Upshall, Tomas Partington and Anthony Chaffey.

In the Junior Formula 500 ranks it was Boyd Chaffey standout performer, winning three of their four races, with Bodie Smith snaring the other.