For the second time this season Rushworth Speedway will hold a Street Stock feature event and for the first time, the Victorian Street Stock Series will put on a show at the Goulburn Valley venue with support from Bendigo business Claridge House Removals. 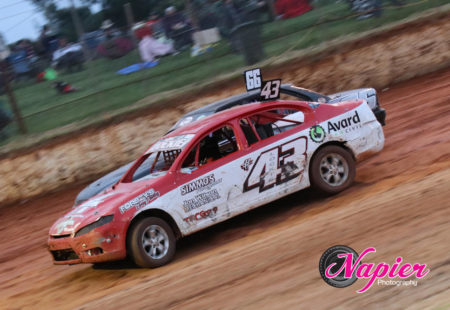 Current points leader Jamie Lock from Bendigo who earlier this season won the feature event at Rushworth for Street Stocks and won the most recent round of the Victorian Street Stock series at Nyora is the man to beat.

Jamie loves the limelight, loves to put on a show, however he is going to have his hands full and may even get a tap or two on his bumper bar if he finds himself at the front of the field.

As you scroll through the list of nominations the VSSS will say this, anybody looking for a career best result is capable of a top ten here if your used to making up the numbers, it could be a confidence boosting night for those drivers who just love racing and travelling to new places. We are tipping this straight out of the box, Jamie Curtis, Greg Parks, Craig Claridge, Nathan Dunn, Todd Rose, Stephen Petrie or Kevin Brogmus, one of you guys are going to earn a top ten result, we can feel it.

Duell, Lawrence, Blomeley, Hutchinson and Jordan have recent Street Stock results to back their credentials for a top five finish, a podium and even a victory. That is a great list of drivers aiming to knock Lock off his number one at Rushworth spot that he currently holds.

Nick Hill and Brad Hill are all due for a breakout performance, whilst Zoe Salau had the boys rocked at Nyora as she won heat races and ran in the top five for some time.

Allen Treble joins the series in the car that won the opening round of the series at Wangaratta. Treble can steer, make no mistake and is a smokie to finish in the top three. Do not count him out. Treble has a history in Independent Club racing, Crash and Bash, Sports Sedans and Street Stocks and is a handy steerer on the bitumen over at Winton in a Speedway car.

Will it be Lock to win or somebody else?

Will it be a Holden first past the post or will it be Ford for the third time in a row?

Will a Goulburn Valley or Bendigo local win or will the visitors take down Rushworth?

The Victorian Street Stock Series is also pleased and proud to announce there will again be some Bicycles to be won, one for a girl, one for a boy supported by ‘Peaches Fruit Market’ Ballarat Store, with multiple stores around Victoria.

Be at Rushworth Speedway on 9 Mile Road Rushworth from 4pm on Saturday to see how things pan out, you won’t want to miss twenty plus Stockies chasing a Grand.