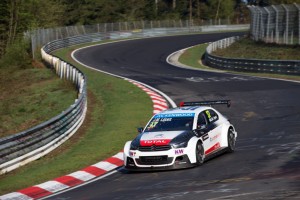 With two weeks to go before the German round of the FIA WTCC, the competitors had a day of collective testing to get to grips with the Nürburgring and its legendary Nordschleife.

The day went very well for the Citroën Total team, with its four C-Elysée WTCCs all finishing in the top 5.

The fastest time went to José María López, the only driver to dip below 8 minutes and 40 seconds. He was followed by Sébastien Loeb and Ma Qing Hua.

One of the lessons the Citroën Racing team learned from this test session is that the weather in the Eifel mountains can be somewhat unpredictable.

But this morning, there were blue skies over the pitlane when the track opened for business.

The goal set by the engineers was simple: to get as many laps in as possible so that the drivers could begin to feel at ease on the Nordschleife. With the drivers completing three laps at a time – the distance they will race over at the Nürburgring on 16 May – the kilometres quickly mounted up.

The only fly in the ointment involved Ma Qing Hua, who broke his suspension when he hit a safety barrier midway through the day. That didn’t stop the Chinese driver producing some excellent performances, however, including the third-fastest time of the day.
With his name at the top of the timing screens from beginning to end, José María López was the only driver to go faster than 8 minutes 40.

The World Champion set the benchmark towards the end of the afternoon, with a lap clocked at 8:38.027. That was two and a half seconds quicker than Sébastien Loeb, who also ranked highly throughout the session.

The Citroën Total team now head to the Hungaroring, where they will contest the third meeting of the FIA WTCC season at the weekend.
What they had to say

José María López (1st – 8:38.027): “This was our first outing in the Citroën C-Elysée WTCC on the Nordschleife, and I loved every lap! I now understand a little better why everyone talks about it as such a legendary venue. We worked hard to find the right setup and I can’t wait to come back for the races. I’m really happy to have clocked the time I did. It gives me confidence.”

Sébastien Loeb (2nd – 8:40.517): “It’s been a positive day. We organised our programme to make sure we got as many laps in as we could. On such a unique circuit, where there is absolutely no margin for error, it was important to get as much practice as possible. The track is narrow and the safety barriers are not far away. It feels totally different from any other circuit. I’ve never seen anything so difficult, even at Le Mans!”

Ma Qing Hua (3rd – 8:41.489): “I think all drivers should come and spend a day driving here! It was a good opportunity to get a day of testing in before the race. The track is impressive. It’s a challenge from start to finish, with the grip changing from one turn to the next. It was quite tough this morning, because there were still some damp patches. We got better run by run. We lost a bit of time after I hit the barrier, probably due to a flat tyre, but we got going again and ended with a good time.”

Yvan Muller (5th – 8:49.165): “I found the going pretty tough. I lagged behind my teammates all day. I closed the gap a little bit, but it’s still quite big, to my mind. That said, I didn’t take any big risks. I’m going to work with the engineers to try and do better in two weeks’ time.”