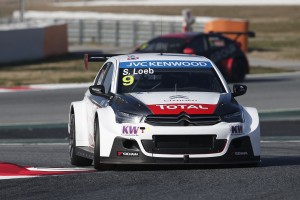 After amassing 17 race wins and two world titles in their very first season in the competition, the Citroen Total team are about to start a brand new FIA WTCC campaign.

– The first round takes place in Argentina, the home country of World Champion Pechito López.

– A fifth car, driven by Mehdi Bennani and managed by Sébastien Loeb Racing, will be entered in a private capacity.

For Citroën Racing, early March is all about the Americas this year. While the Citroën Total Abu Dhabi World Rally Team takes part in Rally Mexico, the WTCC team will head to Termas de Río Hondo, in Santiago del Estero Province.

In just two years, the circuit has earned a place in FIA WTCC folklore. In 2013, a certain José María López won there in his very first outing in the competition. That performance caught Citroën Racing’s eye as it sought to put together a team of drivers for 2014. Last year, in his return to Termas, Pechito was sensational, grabbing pole position and winning both races, a feat unequalled by anyone else all season! Those results put him firmly on course for the world title…

This time around, he will be starting from scratch, in what looks like being a very open season. Of course, José María López will be aiming to retain his crown. His teammate, Yvan Muller, meanwhile, will be seeking to claim a fifth world title. Having finished third in the overall standings last season, Sébastien Loeb is making no secret of his desire to move to the next level and give his teammates a run for their money. Racing a full programme for the first time this year, Ma Qing Hua is dreaming of emulating Pechito’s exploits… And then there are all the other teams, who have had plenty of time to up their game during the three-month off-season.

This first meeting will answer lots of questions, and give us an early indication of the pecking order. The Citroën Total team, which has placed its faith in stability – you don’t change a winning team, after all – will be wanting to stamp its authority on the competition from the off.

Yves Matton, Team Principal, Citroën Racing: “We haven’t done a lot of testing this winter. Our technical team was focused on getting the new DS 3 WRC homologated. That said, we had already worked on some changes to the cars, which will be showcased at Termas and throughout the season. The five Citroën C-Elysée WTCC competing in Argentina have a new front suspension system and an altered aerodynamic setup. Each of our drivers has prepared very conscientiously, in his own way. They all want to do the best they can and they all want to win! Just like last year, the watchwords will be team spirit and respect on the track. We are expecting fierce competition, and our drivers will have to work together to make sure Citroën comes out on top. Our goals are simple: to do as well as we did in 2014 and retain our titles!”

José María López (Citroën C-Elysée WTCC n°37): “It’s exciting to be starting my title defence at my home circuit! Everyone who was at Termas last year saw how passionate the Argentinian people are about motor sport. Everyone will be behind me, at a track I know like the back of my hand. It is going to be vital to start the season well, and if there’s one place where I can do that, it’s here! Every year, the first round brings its fair share of challenges. I haven’t changed, but my rivals know all about me now. They know what I’m capable of, and they’ll have me in their sights!”

Yvan Muller (Citroën C-Elysée WTCC n°68): “The start of this season will be different from other seasons, as we will be starting a long way from home, and in the middle of summer to boot! The first race of the season is always a special occasion, with lots of changes to the cars, the livery and the driving personnel. I’m in a good frame of mind. I feel calm and I don’t feel any pressure. I can’t wait to get going. It’s been a long winter. I’ve thought a lot about last season and about what I needed to change to get back to my best. I’m confident about the improvements made to the car, and the team has a year’s experience behind it now, which will be invaluable in helping us hit the ground running.”

Sébastien Loeb (Citroën C-Elysée WTCC n°9): “I’m not used to such a long off-season and I can’t wait to get out there again! My goal is to use the experience I have gained to keep on improving. I want to compete with Pechito and Yvan for the top places, score plenty of points and win more regularly. With five new circuits on the calendar this year, local experience won’t count for as much, and that will be good for me. The changes made to the Citroën C-Elysée WTCC have worked well in our test sessions. Let’s hope that they will work on the other circuits too, starting with Termas!”

Ma Qing Hua (Citroën C-Elysée WTCC n°33): “I’m really happy to be carrying on with Citroën Racing, and to be racing a full season too. Competing as often as the others can only help me to feel more at ease with the car. I prepared over the winter, with plenty of physical training and two good test sessions. I think the technical changes suit my driving style. I want to finish every race, and in a good position too. It’s about time we saw more Chinese flags on the podiums! Unlike my teammates, I haven’t raced at Termas before. On the simulator, it seemed like a tough circuit. The track is slippery, particularly when it’s hot, but that’s the same for everyone!”

CITROËN DRIVERS TO GO OUT AND MEET THEIR FANS

As is customary on their trips to Argentina, Citroën Racing’s drivers will be undertaking a number of promotional and media commitments. As soon as they land in Buenos Aires, José María López, Sébastien Loeb and Turismo Nacional Champion Matias Rossi will be the star attractions of a “champions’ roadshow” at the intersection between Avenida Diagonal Norte and Calle Suipacha. The event begins at 2 p.m. on March 1st.

On Tuesday afternoon, Pechito and Seb will be joined by Yvan Muller in Córdoba for another event, intended to offer support and comfort to the victims of the recent floods. Finally, on Wednesday evening, the drivers will once again go out and meet their fans in the streets of Santiago del Estero.

The season’s curtain-raiser kicks off on Friday 6 March, with a first session of free practice at 10.00 a.m. The two remaining sessions are scheduled for Saturday at 8.45 a.m. and 11 a.m. Qualifying will start at 3 p.m. and will follow the traditional Q1/Q2/Q3 format. The races will take place on Sunday, at 3.15 and 4.30 p.m. Argentina’s time zone is GMT-3, four hours behind France.