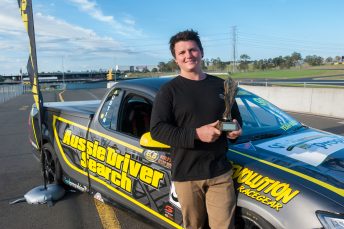 John Lodge will realise an ‘impossible dream’ when he embarks on a debut in the V8 Utes support category at the maiden Supercars Coates Hire Newcastle 500 starting on Friday (November 24).

As part of the successful Aussie Driver Search competition, Lodge, 28, recently won a drive in what will be the final Ford and Holden Utes race before the category switches to diesel-powered dual cab SuperUtes next year.

While Lodge has a wealth of experience in speedway, he is plunging into the deep end as it will be his first circuit race of any form.

Since winning the final of the ADS concept late last month at Sydney Motorsport Park, Lodge returned to the western Sydney venue for a specially organised practice day in the Ford Ute he will handle on the new 2.6km Newcastle street track.

The ADS opportunity has seen Lodge win the one-off drive which would otherwise cost $20,000 on a lease basis for a race weekend.

While Lodge has compiled an impressive speedway career with state and Australian titles in Street Stockers, he is well aware of the challenges he now faces through the different driving techniques required for circuit racing.

“The practice day on the full circuit at SMP recently was really helpful. There’s still a few little things I’ve got to pick up on,” Lodge said.

“Braking and turn in – it’s a whole different ball game to what I’m used to.

“I know what I need to do it’s just a matter of going out and doing it.

“Speedway to circuit racing is so different. You still need good car control and general ability.

“It’s just coming into the corner where braking and turning is the challenge for me.

“I’m just going to take my time and won’t push myself too hard in the braking zones.”

Supercars stars have already scoped out the 12-turn layout ahead of the event, labelling it as a challenging lap with tricky braking zones and elevation changes.
Lodge says he is still pinching himself at being given a chance to perform on the big stage.

“Dad bought me an entry into the Aussie Driver Search as a birthday present and winning the Utes drive is a big feat for me. It’s a career highlight,” Lodge, a fitter/machinest at Eraring Power Station near Lake Macquarie, said.

“To be on the big stage at a Supercars event – it’s all just fallen into place with the race in my own back yard and the last meeting of the Ford and Holden V8 Utes.

“Whatever comes from this is a bonus,” said Lodge who will commandeer a multiple race-winning Falcon Ute.

“Anything could happen. If I do go well we could look at going into a series somewhere next year.

“I’ve got my speedway cars at home but if I go okay then it might be a look at something different.

“I might get noticed and someone might approach me with an offer but that’s what dreams are made of and I can only try my best.

“Even If I come last I’m still happy to be able to have the opportunity to race.”