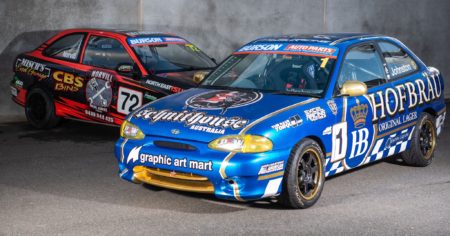 Circuit Excel SA has announced Burson Auto Parts as their naming rights sponsor for the remainder of 2022 and entire 2023 season.

Burson Auto Parts has a long-standing affiliation with supporting grass roots motorsport and is no stranger to the category having previously supported them through their local stores.

The announcement coincides with the Sporting Car Club of SA event this weekend at Mallala Motorsport Park, which boasts a healthy 36-car grid, including two rookies.

Asher Johnston leads the championship while his nearest rival, Jayden Wanzek, will be competing in the TGRA 86 Series in Townsville.

Other notable omissions to the entry list include Mitchell McGarry and Bradley Vaughan, who are also racing in Townsville, as part of the TGRA 86 Series and Dunlop Super3 Series respectively.

Cass Hoare dropped a second from her fastest lap at the last test outing, a testament to the effort she has put in all year to improve her driving.

Newcomer, Ivan Vantagiato, has also been putting in the miles, taking advantage of a recent Misch’s Excel Garage test day to prove his pace as he comes to grips with the category from karting.

Four drivers will contest the B-Cup with Allen Hawkins leading the way with consistent results across both rounds.

He will be joined by James Zeitz, Darren Mattiske and Aden Brand who is making his debut.

Missing in action will be the Hinks family of Graham and Kurtis and Graham Hewitt, who headed north to race at Hidden Valley, after the event was postponed last year due to Covid-19.

Competitors will be treated to 31-racing laps across five races, with free entry across the weekend.