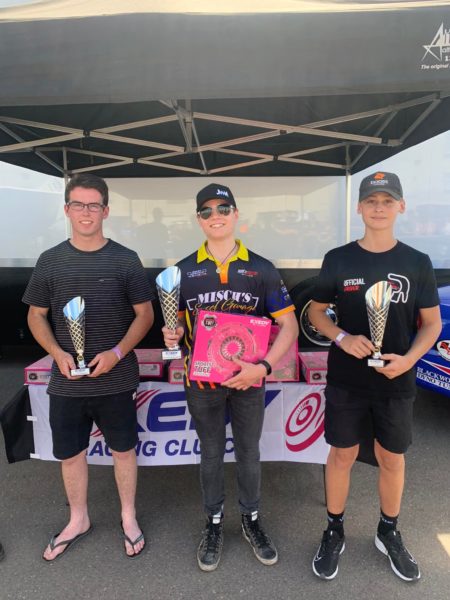 Circuit Excel SA had its final hit out for season 2021 at The Bend Motorsport Park on Saturday as part of the Shannons Motorsport Australia Festival. Held on the International Circuit, 17 competitors were rewarded with six on-track sessions including qualifying and four 20-minute races.

The Excel SuperSprint was proudly supported by well-known clutch brand, Exedy, with brand ambassador and Porsche ace, Max Vidau, showing off his Exedy backed Sprint Car in the paddock.

Despite notable names missing, it was business as usual at the front with young gun, Jayden Wanzek, taking pole over rivals Brad Gartner and Shayne Nowickyj. With eased border restrictions, NSW up and coming star, Rylan Gray, made a solid debut qualifying 4th.

Race 1 was taken out by Wanzek with the top 3 separated by less than 2 seconds. It was an unfortunate end for the Lonsdale Auto Service Centre backed car of James Zeitz who blew a motor with 3 laps to go.

Wanzek, Gartner, Nowickyj and Gray were inseparable from start to finish providing some of the closest and cleanest racing seen all season. South-East local, Brad Gartner, a newcomer in 2021 took the chequered for his first win in race 3 by the closest margins of 0.001.

Further back, Isaac Sparks bounced back oil cooler issues to maintain 5th while another debutant, Jake Mackenzie held his ground in 7th. Mackenzie was impressed with the comradery of other rivals and intensity of racing stating that “Learning how to push the car to the limit with limited practice was the biggest learning curve of the weekend.”

Mount Gambier locals, Keven Lynch and Craig Neave were also inseparable in the mid pack while another debutant, Aaron Semler made consistent gains in pace and track position each race. It was a race against the clock for Semler to finish his car build prior to Shannons but expressed his happiness with how the car turned out saying “it’s got some potential and I’ve got plenty to learn as a driver.” It was a less than ideal debut for Ben Gallyer who suffered from a slipping clutch all day only managing to finish 50% of the races.

After more than 33 laps of racing, Wanzek won the day & a brand new Exedy Clutch with Brad Gartner and Rylan Gray rounding out the minor placings. After a busy year, competitors are looking forward to a reset before the season starts at Mallala in March for Round 1 of the Sporting Car Club State Championship Series.