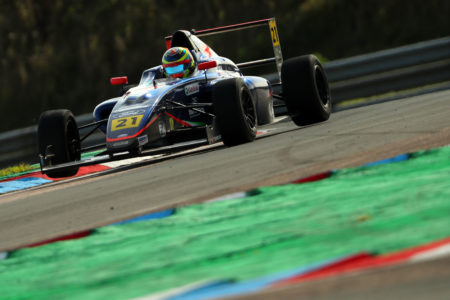 Christian Mansell added to his impressive silverware collection in the F4 British Championship certified by FIA – powered by Ford EcoBoost this past weekend (September 19/20) at Thruxton as he maintained his lead in the Rookie Cup standings.

Coming off the back of a hard-earned three-week break following a busy start to the season, the Carlin driver descended on the fastest circuit in the UK with his focus firmly set on continuing to showcase this impressive speed and racecraft.

Enjoying the demands that were required by both driver and machine around the high-speed 2.35-mile Hampshire venue, the Australian clocked plenty of mileage across Friday’s two practice sessions in preparation for the weekend.

Qualifying would prove to be an ultra-competitive affair with the entire grid covered by little over a second. Setting a best time of 1:13.637, the 15-year-old ultimately settled for eighth and set his sights on moving forward.

Unfortunately for Mansell, a lack of pace in the opening encounter saw him drop down the order – albeit as he valiantly defended – to cross the line in tenth. Despite the lowly finishing position, the Brands Hatch race winner was able to finish second of the first-year drivers.

Starting tenth for race two, the AJM Transport, Castrol and Vawdrey Trailers backed driver wasted no time in moving forward as he charged up the order during the opening stages.

In the thick of the action throughout the 20-minute race, the rollercoaster ride of Thruxton saw the New South Wales based driver show his ever-evolving racecraft and he would bring the car home in seventh overall, whilst also finishing second in the Rookie Cup.

Capping off his weekend on Sunday in race three – broadcast live on ITV2 – Mansell tallied his sixth Rookie Cup win of the season despite carrying front wing damage for a majority of the race.

Involved in contact when entering the Complex early days, Mansell drove round the performance deficit he suffered to grind out a well-earned result to sign off on the fifth weekend of the year on a high.

Mansell’s impressive performance at Thruxton leaves him eighth in the overall Drivers’ Championship, whist also extending his lead in the Rookie Cup standings at the same time.

Christian Mansell: “It has been a weekend of ups, down and even a few bumps so I’m pleased to come away with another win in the Rookie Cup and two more podium finishes as well.

“I absolutely loved the challenge that Thruxton provided, it is a proper circuit and required me to push everything to the limit. It is fair to say I didn’t have the ultimate pace in qualifying and race one but we got our heads down and improved each race.

“Race three was pretty hectic, especially after I suffered damage to my front wing early on, but once I broke free of the chasing pack I was able to bring it home. Coming into the weekend I wanted to maintain the lead we had in the Rookie Cup and it is mission accomplished as we’ve done just that.

“We’re back at it in a couple of days time at Silverstone and I’m looking forward to seeing what we can achieve at the home of British motorsport.”

Silverstone provides the next stop on the calendar for the F4 British Championship certified by FIA – powered by Ford EcoBoost, with three races around the Northamptonshire venue’s National layout set to take place on September 26/27.